The Coexistence of Animal Rights on Earth group is calling on Korea’s Director of Animal Welfare Seo Kyo-Young to take charge on recent cases including dogs being dragged by cars, beaten with metal pipes and axes, and even burned alive.

The charity is asking people to sign a petition demanding maximum punishment for animal abuse, as well as writing to Seo personally to ask him to take action.

New animal rights legislation was put into effect this February, but the group said taht not one person has yet been charged under the new Animal Protection Law. 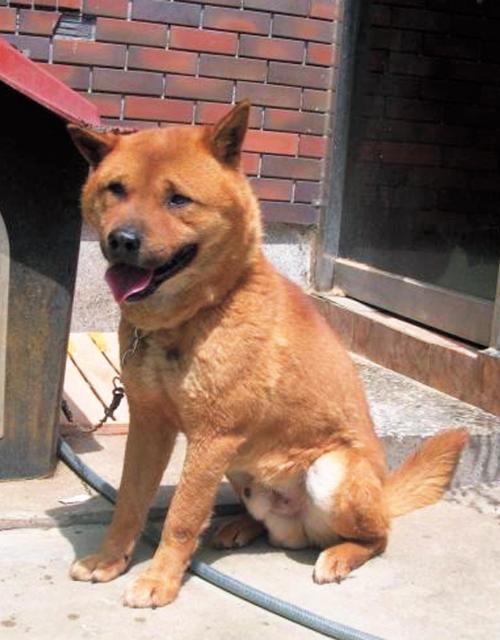 The Jindo dog named Jang-goon that was allegedly beaten to death by a monk in Daegu in December. (CARE)
People harming animals in Korea now face up to one year in jail or a maximum fine of 10 million won ($9,400), a rise from the previous highest penalty of a 5 million won fine.

In the last two months, CARE has gathered more than 40,000 signatures calling for enforcement of the new law.

And a spokesman for the organization said more abuse cases had come to light in the last month than ever before.

“We believe police are reluctant to prosecute one person for animal abuse because it will open the floodgates to other animal abuse cases, including abuse on dog farms. This would be a nightmare for police and prosecution services,” he said.

However, the members of the group were heartened by the fact that more evidence of prosecution was starting to materialize.

CARE activists said that they have convinced a monk from a Daegu temple to make a statement to police after he allegedly killed a dog with an axe while drunk in December.

The case only recently came to light when the organization received a tip-off from a member of the public, but the activists say that they accompanied the monk to the police station where he made a statement about killing the Jindo dog, named Jang-goon, because it was making a lot of noise.

“We think it is just a matter of time before he is officially punished, probably with a fine rather than jail time because he had no previous animal abuse record and he showed remorse,” the CARE spokesperson said.

The group is also hopeful that a man who was captured on video throwing stones at a chained dog before beating it with a metal rod on April 25 will also be brought to justice.

Other recent brutal cases coming to public attention have included a middle-aged man tying a dog by its neck to a pole and burning it. The footage was captured and shared on the Internet by middle school students who witnessed the incident on April 20.

Activists have said that the number of cases coming to light at the same time could pressure police to start prosecuting. Two high-profile cases of dogs being dragged by cars happened within nine days of each other, the latest occurring on April 29.

“The odd coincidence of these events happening at the same time may be partially to be blame for pressuring police to start prosecuting. They can’t simply let that many extreme animal abuse cases go without punishment,” the spokesman said.

“It makes no sense to have laws that are never enforced.”