Father Mun Jeong-hyeon, who became the first Korean to be awarded the human rights prize on Friday, met with 34 high school students to take part in Korea’s first PeaceJam program.

Hundreds of thousands of young people around the world have participated in PeaceJam, which has offices in many countries including the U.S., South Africa, India, Guatemala, the United Kingdom, Mexico and East Timor. But this is the first time PeaceJam has carried out any activities in Korea. 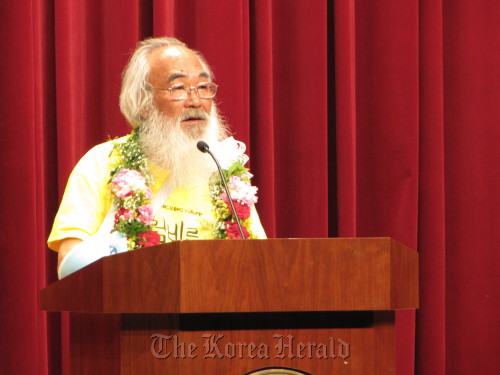 Father Mun Jeong-hyeon makes his acceptance speech at the May 18 Memorial Culture Hall in Gwangju on Friday. (Kirsty Taylor)
Mun met students to talk about peace and human rights in Gwangju on Saturday following an award ceremony there on Friday night.

During his acceptance speech at the May 18 Memorial Culture Hall, the priest warned about a power monopoly at the top of the nation.

“Corruption and self-righteousness of the haves are serious. The value of democracy and human rights that have been achieved with blood and sacrifice are being neglected. Life and peace are being gravely undermined. If we do not establish true democracy in our society, human beings and nature will be irreversibly destroyed.

“We should not accept and adapt to the unjust reality but fight against it by gathering wisdom and courage.”

Mun was involved in fighting against dictatorship in Korea during the mid-70s. At that time, the military regime carried out extrajudicial killings to oppress democratic figures. He has worked since the 1990s to improve the “unequal” relationship between Korea and the U.S. and to relieve military tensions on the peninsula.

In 2003, he organized the “Peace Wind Group” to fight against the dispatch of Korean troops abroad.

He is now involved in protests against the Gangjeong navy base being constructed on Jeju Island, and was recently hospitalized after falling during a protest there.

The priest, known as a “street father” because of his support for victims of human rights violations in Korea, said he did not feel worthy of the prize awarded to carry on the spirit of the victims of the 1980 Gwangju uprising. Although many people were massacred in the Chun Doo-hwan government’s suppression of the uprising from May 18-27 that year, the protestors’ courage is seen as inspirational to bringing democracy to Korea seven years later.

Since 2000, the prize has been awarded by the May 18 Memorial Foundation to 13 individuals and organizations to recognize their work in the field of human rights.

Foundation chairman Kim Jun-tae said: “Awarding the Gwangju Prize for Human Rights 2012 to Father Mun Jeong-hyeon teaches us many lessons because Father Mun has been on the side of the weak facing oppression and has gone to wherever life and peace are threatened to raise his voice with them. He has hurt too, as if their suffering was his own, shared food with them and been with them in the snow and rain. His life can be described as a condensation of the modern history of Korea, especially since the 1960s.”