Committing to its MOU signed in 2009 with Guangzhou officials, the Korean display panel manufacturing giant said Tuesday that the plant, to be equipped with eighth-generation lines, will be in full production in the second half of 2014. 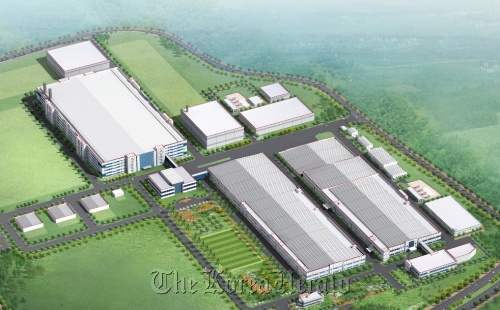 A view of LG Display’s panel production facility in Guangzhou, Guangdong, China. (LG Display)
In 2009, LG Display signed a non-binding agreement to build such a plant in Guangzhou’s economic zone, which offers tax incentives to attract high-tech industries. It planned to invest some $4 billion for a 120,000 sheet production capacity by 2012.

However, LG Display had to postpone the plan due to the LCD market downturn.

Although it held its ground breaking ceremony, the company is still in talks with its Chinese partners regarding financing and capacity, a spokesperson for LG Display said. Such matters are expected to be decided by the end of next month after they evaluate market conditions for LCDs.

LG Display has only so far structured the equity of the joint venture in which the Korean company holds a 70 percent stake, while 20 percent is owned by Guangzhou Development District. Its strategic partner and customer Skyworth Digital, a Chinese LCD TV maker, has a 10 percent stake.

During the ceremony, LG Display CEO Han Sang-beom said its planned panel facility in Guangzhou is part of its “localization” efforts to stay close to its present and potential customers in the region by offering them the company’s high-tech, high-quality products.

In addition to Skyworth, Konka and TPV are some of Chinese companies whose LCD TV plants are located near LG Display’s Guangzhou production facility, the Korean company noted.

Besides attractive tax benefits and Chinese market potential, LG Display is aiming to further advance to become a household brand in China as the country increases tariffs on LCD panels and TV imports to boost its local industry, analysts and the spokesperson said.

China’s LCD TV market will reach over 5.7 million units in terms of consumer purchases in 2014, up from 4.5 million in 2011, LG Display said, citing DisplaySearch data.