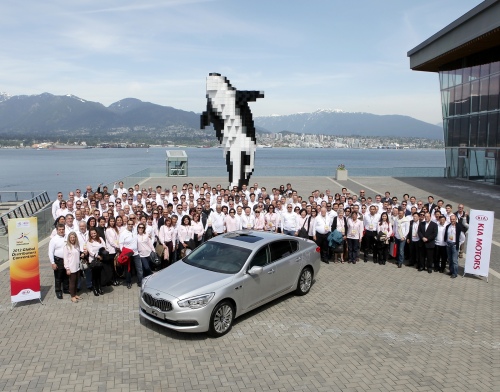 Owners of Kia Motors dealerships from about 100 countries pose during their annual gathering at a hotel in Vancouver on Thursday. (Kia Motors)
Kia Motors has vowed to cultivate its brand power to near that of European and Japanese automakers within five years, following a similar vision its affiliate Hyundai Motor unveiled in April.

Kia disclosed the goal to become a premium auto brand during the 2012 gathering of Kia dealership owners worldwide at a hotel in Vancouver May 14-17.

Kia Motors vice chairman Lee Hyung-keun told participants that the company has set a vehicle sales target of 2.21 million units in the overseas market in 2012, up 8.3 percent from 2.04 million units from a year earlier.

By attaining continuous sales growth and reinforcing global sports marketing at the coming Euro 2012 and 2014 FIFA World Cup, Kia is seeking to enter the list of “first-class brands” by 2017, Lee said.

Kia executives also said the company will introduce the K9 luxury premium sedan and the upgraded model of the Sorento R sport utility vehicle in major overseas markets during the latter half of this year.

About 250 figures, including Kia dealership owners from more than 100 countries and executives from Kia headquarters in Seoul, participated in the four-day annual gathering.

Last month, Hyundai Motor announced that it will prioritize upgrading its brand image across the globe, shifting from its earlier business focus of expanding market share overseas.

“Though Hyundai Motor is also an automotive brand for mass production to ordinary consumers, it has the goal of attaining a premium image,” executive director Cho Won-hong said.

But the company made it clear that it would not introduce a premium brand benchmarking Toyota Motor’s Lexus or Nissan’s Infiniti for the time being.

Hyundai and Kia plan to pour a huge investment into advertising to notify global consumers of their quality-oriented management policy.