South Korea will maintain its tightened quarantine inspections regime on U.S. beef but take no steps to halt imports despite the recent discovery of a mad cow case in the United States, the farm ministry said Friday.

The Ministry for Food, Agriculture, Forestry and Fisheries said a nine-person inspection team that checked various cattle and meat packing facilities in the United States concluded there is no real human health threat posed by American beef. 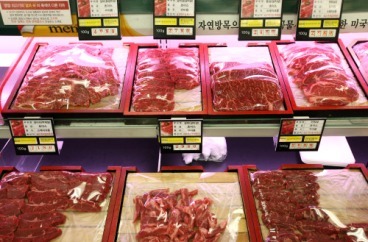 The livestock quarantine consultation committee that advises the farm minister does not think stopping imports is necessary at this juncture, it added.

Seoul currently opens half of all U.S. beef packages entering the country to make certain that the contents meet import rules.

Normally only 3 percent of shipments are checked.

Earlier in the day, the team led by Joo E-suk, head of the animal quarantine office, returned after a 12-day trip to the U.S.

Local inspectors have been able to confirm that the latest mad cow disease, also called bovine spongiform encephalopathy (BSE), involved a very rare "atypical" case, it said. The confirmation was carried out by checking DNA of the dead cow.

The rare type of BSE may not be passed on to human and because the animal infected was over 10 years old, South Korea would not have imported the meat from such an animal in the first place.

Under a bilateral deal, Seoul only imports meat from animals under 30 months old.

Ferreting out animals that have BSE is important because it can keep contaminated meat from entering the food chain. The international community has banned giving protein-based feed that uses cow parts to cloven hoofed animals because this is suspected of brining on the brain-wasting disease that may cause the fatal variant Creutzfeldt-Jakob disease (vCJD) in humans.

The latest mad cow case reported in California in late April is the fourth to be detected in the U.S. Seoul had banned U.S. beef imports in late 2003 after the first case was reported, but fully reopened the market in 2008 after long-drawn negotiations with Washington. (Yonhap News)