SAP is always on the lookout for acquisitions that can help the world’s largest enterprise software company gain innovative technology and reinforce its business in mobile, in-memory and cloud computing.

Korea would definitely be one of many potential markets where SAP, backed by “tons of cash,” would seek opportunities in mergers and acquisitions, said Hyoung Won-joon, CEO and president of SAP Korea.

“It may be a cliche to say this, but we’re looking for ‘the hidden pearl’ in Korea’s IT market for possible acquisitions,” Hyoung told The Korea Herald. 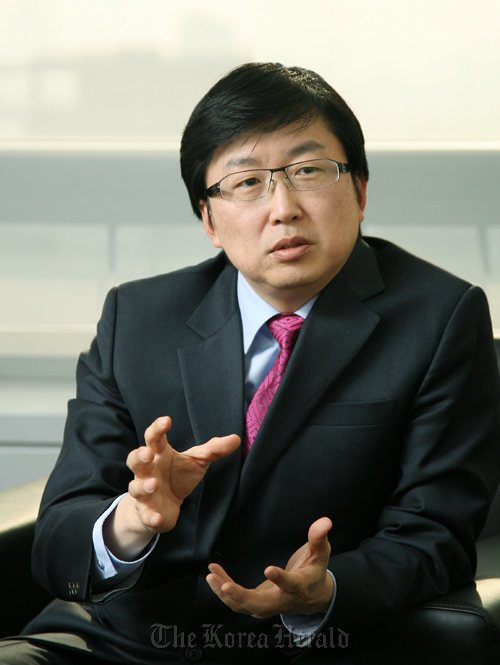 Hyoung Won-joon
He added that the company would be interested in doing deals similar to the one SAP did when it acquired an in-memory lab run by a Seoul National University professor. The lab developed the “core engine” of SAP’s High-Performance Analytic Appliance database solutions, which process big data at faster speeds with higher efficiency, Hyoung said.

SAP’s acquisitions are not for the purpose of increasing its global market share, but mainly in line with efforts to seek untapped technologies to provide better solutions to its worldwide clients, he said.

The NASDAQ-listed SAP posted sales of 3.35 billion euro ($ 4.4 billion) in the first quarter of 2012, up 11 percent from 3.02 billion euro a year earlier. It has liquidity of some 5.2 billion euro, including cash and cash equivalents and short-term investments, according to financial statements.

Also, the company is particularly seeking to promote the Korean software firms via partnerships in developing enterprise mobile applications for export.

Hyoung said Korea already has the capacity to develop higher value-added applications than India or China, and he is eager to help the Korean enterprise software industry on a par with the global advanced markets.

“Korea has a lot of developers in the B2C (business-to-consumer) mobile application segment, and if we can introduce them to the world of highly lucrative B2B (business-to-business), then this country, backed by its dynamism and rapidness, can gain an edge globally,” Hyoung explained.

He added that SAP cannot do this alone, but needs to do it through partnerships with system integrators, small and medium-size enterprises, universities and the government.

As platforms have become standardized, demand for mobile applications, which can bridge the gap between B2B and B2C integrated with enterprise resource planning and customer relations management software, will grow further.

The CEO gave an example of SAP’s Syclo, which develops mobile applications for the power utility sector.

“It is useless to reinvent platforms as they have become commoditized. Mobile apps and content are where future growth will be,” he said.

Such applications will be useful in both the private and public sectors, and with Korea’s rating by the United Nations as the leading e-government system developer, the country can certainly exhibit its strength in the field.

But Hyoung urged Korea to move quickly, and said he hopes to make this happen within 3 years.

“Unless Korea acts fast, it will most likely to lose to India and China,” he said, adding that those countries with low labor costs will catch up with Korea in no time.

SAP was established as a venture start-up by five people in the early 1970s, and currently provides its B2B software to some 183,000 customers in 120 countries.