Prosecutors on Monday raided the headquarters of four troubled savings banks and the homes of their executives suspected of corruption, illegal loans and embezzlement.

The investigators seized computer hard drives and documents thought to contain evidence suggesting that top management approved illegal loans, a violation of the Mutual Savings Banks Act. They are also suspected of embezzlement and dereliction of duty.

About 30 major branches are also expected to be investigated to find out if management corruption led to the banks’ suspension for failing to meet the capital adequacy ratios recommended by the Bank for International Settlements standards. 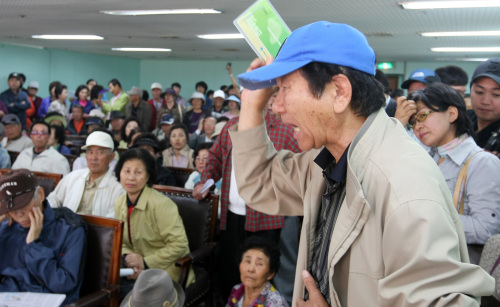 A client protests the suspension of business at a Mirae Savings Bank branch on Jeju Island on Monday. (Yonhap News)
Their managers are suspected of approving loans exceeding the legal limit and illegal loans using accounts under borrowed names, while fabricating the appraisal values of collateral. They are also accused of extending loan periods without legitimate reason.

Management and major shareholders are also suspected of lobbying financial, political and administrative figures to conceal their sloppy operations.

Prosecutors are planning to summon those responsible for the breakdown of the banks and have already imposed travel bans on them.

The four troubled banks are the latest in a series of savings banks suspensions. Of these, Samwha Mutual Savings Bank and Busan Savings Bank were found to have participated in illegal practices involving the banks’ officials as well as individuals with high-level government connections, such as Kim Jae-hong, a cousin of first lady Kim Yoon-ok.

Investigators assume similar malpractices may have taken place at the four latest banks, including tip-offs to their VIP customers about the impending suspension of operations so they could withdraw deposits in advance.

Meanwhile, the prosecution has requested that a local court issue an arrest warrant for Mirae Savings Bank Chairman Kim Chan-kyong, who was caught attempting to flee to China with 12 million won ($10,500) in cash he had withdrawn from the company’s money market deposit account at another bank just before the suspension order was decided.

Kim, caught by the Coast Guard last Thursday, is now being interrogated over an additional 13 billion won he is believed to have transferred to borrowed name accounts before making the unsuccessful escape attempt.

Kim and Solomon Chairman Lim Suk are also suspected of embezzling company funds and hiding them at a third location. Lim has also reportedly transferred the registration of his 4 billion won apartment in southern Seoul to his wife to evade seizure.