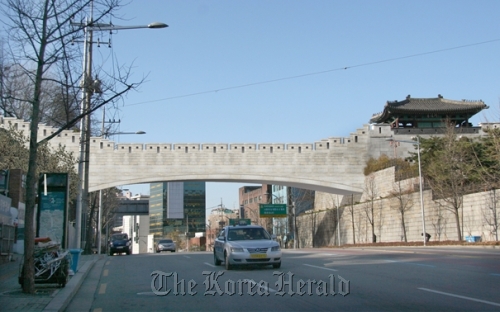 A computer-generated image of the restored Hanyang City Wall (Seoul Metropolitan Government)
Seoul City announced on Monday a master plan to restore the medieval city wall surrounding the capital by 2015 and to register it on the UNESCO World Heritage list.

The Hanyang City Wall was built in 1396 during the Joseon Dynasty (1392-1897) to protect the capital from foreign invasion. Hanyang is an old name of Seoul.

Many parts of the wall were removed or destroyed during Japan’s 1910 to 1945 colonial rule.

The wall stretches 18.6 kilometers along the peaks and ridges of four mountains and connects eight gates.

So far 12.3 kilometers of the wall have been repaired.

An advisory committee consisting of experts in various fields including history, architecture and city planning will review the master plan in the second half of the year.