Prominent figures in the ruling Saenuri Party have set out to challenge for the new leadership in the imminent in-party election, with the party’s reform-inclined floor leader taking a commanding lead.

There are nine members listed as candidates but most are eying Supreme Council membership as Rep. Hwang Woo-yea is expected to easily win the chairmanship.

The right-wing party is to hold its national convention next Tuesday to elect a five-member decision-making body, including a chairperson who will lead the camp into the presidential race in December.

Hwang, since he took his current post last May, has been known for his gentle leadership and peaceful communication.

He also seized the initiative in passing the contentious National Assembly Act revision bill, aimed at preventing the use of violence in the house.

The senior lawmaker recently reinforced his in-party position by winning his fifth parliamentary term in Incheon, Gyeonggi Province, where the party’s general election results generally did not meet expectations.

Next in line is Rep. Lee Hye-hoon, who automatically won the council’s female membership quota. The second-term lawmaker was also recognized for her contribution as the party’s election headquarters master last month, though she was denied candidacy in her constituency in Seoul. 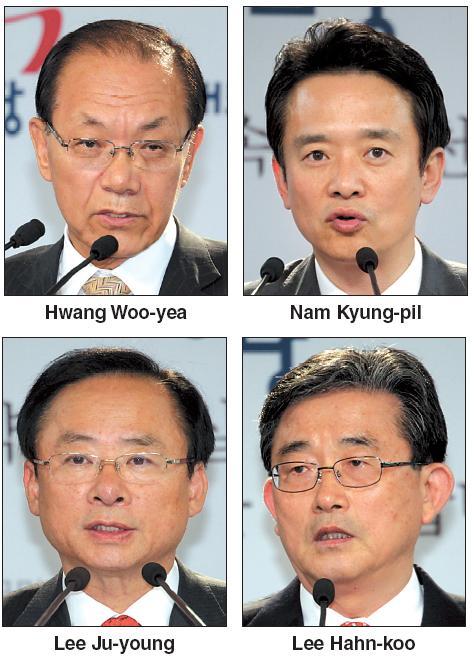 Third-term lawmaker Rep. Yoo Ki-june, together with fourth-term Reps. Shim Jae-chul and Won Yoo-chul, is also considered to have a good chance of winning a leadership seat.

Yoo, former party negotiator for the parliamentary foreign affairs committee, is a key member of the party’s pro-Park Geun-hye faction and one of the reform-inclined figures.

The Busan lawmaker also expects to win support from Yeongnam-based colleagues, who form an influential group within the party.

Shim and Won, the only non-Park figures in the list, will be representing the minority pro-Lee Myung-bak group, should either join the council.

Observers noted that the two may later choose to unify their candidacy to rake in the non-Park votes.

While the leadership candidates geared up for next week’s national convention, others face the more imminent floor leader election this Wednesday.

The Gyeonggi-based Nam chose Yeongnam-based Kim Gi-hyeon as running mate for the party’s policy committee chairman, whereas the two other Yeongnam candidates selected Seoul elects for the purpose.

Meanwhile, the main opposition Democratic United Party on Sunday formed an emergency leadership council, headed by recently elected floor leader Park Jie-won. Park and the 13-member council will run the party for about a month until it elects new leaders.

The DUP will pick its new chairperson and members of the Supreme Council at a national convention on June 9.