During their stay, ambassadors and their spouses also attended the Geoje World Shipbuilding and Marine Festival opening ceremony.

Geoje Mayor Kwun Min-ho said: “I really appreciate the ambassadors and VIPs who have made their best efforts to attend this festival. I haven’t seen this many ambassadors get together before so I am very honored and happy.

Czech Ambassador Jaroslav Olsa Jr. said that although he came from a landlocked country, his people were still fascinated by the sea. 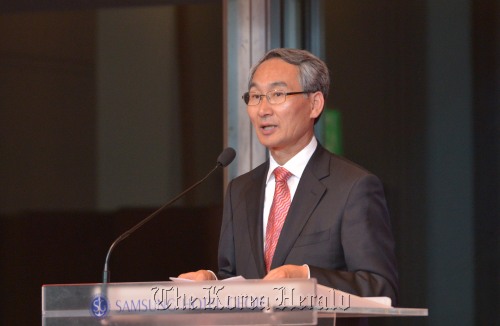 Geoje Mayor Kwon Min-ho tells foreign diplomats about Geoje’s shipbuilding industry during their trip to the Island on Friday. (Lee Sang-sub/The Korea Herald)
“I am very much happy to be here and enjoy the beauty of the sea,” he said during a congratulatory speech to launch the festival on Geoje’s seafront.

“I am really surprised by the quality and greatness of your shipbuilding industry. It is something of which you are very proud and I think that many important Korean admirals such as Yi Sun-shin or Chang Bo-go would be very proud of what you did here. I hope that both Geoje and shipbuilding here will have a great future.”

The festival launch ceremony was followed by the Geoje Investment Forum at the Geoje Samsung Hotel.

Moroccan Ambassador Mohammed Chraibi thanked The Korea Herald and Geoje City for making the event possible, as well as praising the city’s development.

“We are very happy to see this kind of event continued to help a better mutual understanding between our countries and to enhance our friendship,” he said.

Speaking at the forum, Lim Chae-ho, vice governor of the South Gyeongsang government told the ambassadors: “Geoje is our great pride because it is a growth engine of shipbuilding and maritime affairs in our province.”

And the diplomats were given a tour of Samsung Heavy Industries shipyard on the island on Saturday.

SHI project planning team senior manager Yeo Dong-il showed ambassadors and their spouses around the shipyard where 158 vessels are currently under construction or being designed. More than 20,000 people work by the 7-kilometer quayside each day to build vessels ranging from crude oil tankers to cruise liners. The 4-square-kilometer yard can produce up to 70 vessels a year, using about 1.5 million tons of steel a year for production.

Yeo spoke about SHI’s current projects and new fields of development during the visit.

He said: “We are very happy to have the ambassadors here on Geoje to show Samsung’s work and development.”

“In the shipbuilding industry, Korean shipyards are the biggest market in the world. At the moment we are leading this industry but we think that Chinese shipyards are very quickly growing. I hope that it will take China more than 10 years to catch up with Korea on the level of technology, quality and safety. Meanwhile we are trying to develop more creative and new products to keep our position in this industry.”

New work includes tankers that can break through more than one meter of ice to utilize new arctic routes and vessels to store CO2 and transfer it around the word.

After the shipyard tour, the ambassadors walked the Ocean Way of Geoje to take in some maritime feats, before eating lunch aboard the opera cruise docked ship.