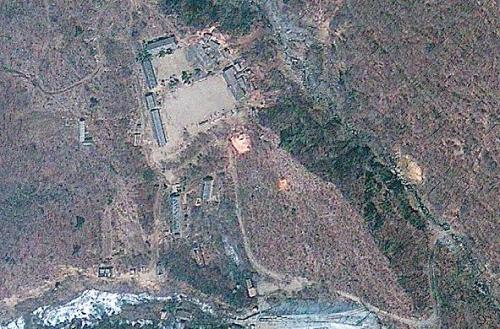 This April 18 satellite image provided by GeoEye appears to show a train of mining carts at the lower center of the frame and other preparations under way at North Korea’s Punggye-ri nuclear test site. (AP-Yonhap News)
Seoul reports Pyongyang has 3,000 nuclear specialists, 2,000 centrifuges

The communist state is thought to be planning to conduct a third nuclear test soon in what appears to be a move to make up for last month’s botched rocket and raise its bargaining power with the West.

As the North claims it has some 2,000 centrifuges in operation, it is believed to have produced some 40 kilograms of HEU a year ― enough to produce one or two bombs annually.

Assuming that the North turned its military nuclear program from a plutonium-based one to an HEU one in 2009, the expert, who declined to be named, said that Pyongyang might have developed three to six bombs over the last two or three years.

Taking the world by surprise, the North unveiled its uranium enrichment facility at its main nuclear complex in Yongbyon to American scientist Siegfried Hecker in November 2010.

“We presume that the North began its uranium enrichment research since the late 1980s. The scale of its enrichment facility and the level of nuclear technology have yet to be known,” the expert said.

“There is a high possibility that the North uses the technology for military purposes and has centrifuges at a separate third place.”

The North has its nuclear test site in Gilju, North Hamgyeong Province. It carried out two nuclear tests in 2006 and 2009. Intelligence authorities in Washington and Seoul believe that Pyongyang is preparing for another nuclear test.

As for its stockpiles of weapons-grade plutonium, the North has accumulated now some 40 kg of plutonium after it reprocessed spent fuel rods at least three times in 2003, 2005 and 2009, according to the expert.

Given some 6 kg of plutonium is needed to build a single bomb, the North is thought to have produced six to seven plutonium-based bombs. With the HEU bombs, the North is presumed to have at least 10 nuclear weapons.

The expert also said that the North has some 3,000 nuclear experts, who are currently working at the Yongbyon complex, college-based research institutes and other state centers.

The North has some 26 million tons of unenriched uranium in reserve and about 4 million tons are minable, the expert said. As of 2010, the world’s uranium supply was tallied at around 71,000 tons.