For the last three months, desperate efforts to stop China from repatriating North Korean refugees have yielded one crucial outcome ― a sharp increase in domestic and international awareness of the issue.

Lawmakers, celebrities and activists have been united under the slogan of “Save my friend” since the news reports came out in early February that scores of the defectors were likely to be deported to the repressive state.

At the vanguard of the campaign was Rep. Park Sun-young of the minority Liberty Forward Party. On Monday, she finished her 77-day rally in front of the Chinese Embassy in Seoul, which earned her the nickname “big mother of defectors.”

“The biggest achievement we have from our rallies is that people now understand the excruciating pains of North Korean defectors. Internationally, China has started to feel ashamed (of its repatriation policy),” Park told The Korea Herald. 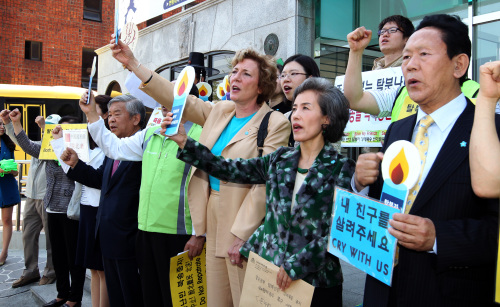 Protestors call on China to stop repatriating North Korean defectors during a rally in front of the Chinese Embassy in Seoul on Monday. Participants include Rep. Park Sun-young (second from right) of the Liberty Forward Party and Suzanne Scholte (third from right), chairwoman of the U.S-based North Korea Freedom Coalition. (Yonhap News)
“People are dying there, being dragged and yelling for help. We should reach out to them and help them without any reason.”

As part of her efforts to stop the “inhumane repatriation,” she also led a hunger strike for 11 days in February. Her campaign drew the attention of political circles to North Koreans suffering from poverty and social and political repression.

After her term as lawmaker ends later this month, she plans to seek a series of programs to help school-age and elderly defectors. They include establishing an alternative school program and a nursing home.

Despite growing criticism, China has stuck to its decades-old repatriation policy with its ally North Korea. It has categorized defectors from the North as “illegal economic migrants” rather than refugees protected by international conventions.

Some experts said that Beijing appears to care more about state sovereignty than individual human rights, an issue it looked reluctant to face amid ongoing domestic challenges concerning Tibet and Xinjiang Uighur. The increasing inflow of refugees into its territory is another concern for Beijing, they noted.

Another key driver of the campaign to protect the refugees is Cha In-pyo, a renowned actor who starred in the movie “Crossing,” a vivid depiction of the perilous escape from the North.

Cha brought a host of other celebrities to join the campaign and encourage the participation of citizens here in it to appeal for more domestic, international efforts to help “our brothers, sisters and friends.”

“Their cries have never been heard. Their cries are reverberating just in the darkness,” said Cha on a SBS talk show. “We all should show our attention to the defectors. This is why I was crying for them.”

The campaign has led the Seoul government to become more active in its calls for China to stop the repatriation.

Seoul had been criticized for the so-called “low-key” policy concerning the defectors it adopted apparently out of concerns that it could strain ties with Beijing. It raised the repatriation issue at a recent U.N. human rights panel, but stopped short of specifically mentioning China.

David Kim was another activist who led a signature-collecting campaign online, hoping that the repeated calls to stop the deportation could help the sister of her friend who was arrested in China while trying to defect to the South.

For some three weeks since the start of the campaign, his group garnered some 178,000 signatures from all around the world.

“This issue is not a political one. We should think that the people living on the concrete floor and being tortured are also human beings just like us. As the world pays more attention to them, I believe the situation will improve in the North,” he said.

Rev. Peter Jung, one of the leading members of the Seoul rallies, believes that campaign participants now map out more effective strategies on the back of public attention to maintain the momentum for the anti-repatriation campaign.

“The forced repatriation still takes place. So we need to carry out our investigation and collect repatriation cases so that we can clarify China’s violations of international conventions possibly to refer the case to the international court,” said Park, head of the activist group Justice for North Korea.

“We also plan to hold exhibitions and conferences on the issue to raise public awareness. We will continue to seek an international coalition to address this issue.”

The campaign also brought together a number of North Korean defectors including young students. Particularly, students from Yeomyung School, an alternative school for defectors, came out, making an emotional appeal to save their friends.

“We will continue our campaign for the refugees until we, Korea, is reunified,” said Cho Myung-sook, vice chief of the school.

“Defectors have always been in the shadow whether they were in the North or are in the South now. But things will change and they will play a good role on our road toward reunification.”

It then dropped to 2,379 in 2010 when Pyongyang tightened its border control while preparing for its hereditary power succession. Last year, the figure rebounded to 2,737.