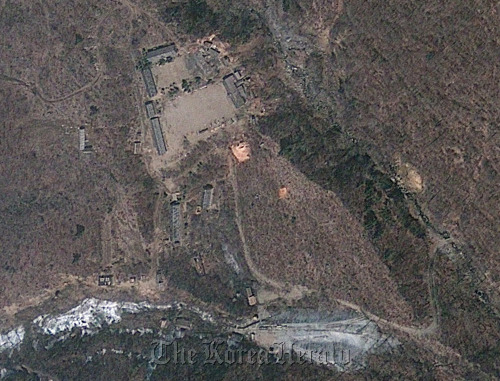 This April 18 satellite image provided by GeoEye appears to show a train of mining carts at the lower center of the frame and other preparations under way at North Korea’s Punggye-ri nuclear test site. (AP-Yonhap News)
WASHINGTON (AFP) ― North Korea remains largely cut off from the Internet and mobile phone technology that links much of modern society, but any nuclear test would be swiftly revealed by global scientists, experts say.

Thousands of earthquake specialists would be able to measure the seismic waves from any underground blast and alert the world in real-time, a capacity that has grown since the hermit state’s last nuclear tests in 2006 and 2009.

“Just within a very few minutes it would be really obvious that they would have done this,” said Paul Richards, a leading expert in nuclear weapons seismology and a professor at Columbia University.

“The only delay would be the delay in which seismic waves travel around the world to various stations,” he added.

Those waves travel about five miles per second, and would be picked up first by the nearest monitoring stations in South Korea and Japan, followed by other worldwide outlets that typically record hundreds of earthquakes each day.

The waves from a nuclear test look different to scientists than the waves from an earthquake, so there is no chance of getting the two confused, Richards said.

A report earlier this year by the US National Research Council, a part of the National Academy of Sciences, described a host of recent improvements to worldwide technology when it comes to detecting and verifying a nuclear test.

“Technical capabilities for seismic monitoring have improved substantially in the past decade, allowing much more sensitive detection, identification, and location of nuclear events,” it said.

The number of certified international monitoring stations grew from three in October 2000 to 264 in February of 2011, bring the global network envisioned by the Comprehensive Test Ban Treaty Organization to near 90 percent complete, it said.

The threshold for detecting a test has dropped too, with regional monitors now able to sense an explosion as small as 20 tons or 0.020 kilotons explosive yield.

Other advanced methods include radionuclide monitoring, whereby sophisticated sensors pick up evidence of atomic debris in the air and can offer a solid confirmation of the place and time of a nuclear test.

The world’s “radionuclide network has gone from being essentially non-existent to a nearly fully functional and robust network with new technology that has surpassed most expectations,” said the National Research Council report.

In addition, infrasound and hydroacoustic monitors can pick up vibrations in the air and oceans that are undetectable to the human ear.

Many of these nuclear test sensing capacities are held by an international monitoring network of nations that have signed on to the as-yet unratified Comprehensive Test Ban Treaty (CTBT), adopted by the UN General Assembly in 1996.

But others belong to individual nations’ military and spy agencies, in some cases surpassing the abilities held by the global network.

For instance, the US Air Force operates special planes that can fly to the location of a radioactive plume and collect data for analysis.

Such tests allowed the US Director of National Intelligence to confirm the North Korea test in 2006 along with its location, date and size.

The United States has access to a wealth of data from satellites that would be “immediately available to the military authorities” in case of a nuclear explosion in the atmosphere or in space, the NRC noted.

“Lots of people will know very quickly,” said Christopher Paine, director of the nuclear program at the Natural Resources Defense Council, adding there has been no “revolution” in technology but rather a series of gradual improvements.

“What has really changed is the rather vast expansion and penetration of the Internet and of cell phone technology.”

As technology opens up societies that were once closed, some day science may be just one of several methods to verify the actions of secretive governments, he said.

“North Korea is the last example of a Stalinist state that remains pretty much cut off from the communication that that every other country in the world is attached to,” Paine said.

“Societies are becoming much more irreversibly transparent despite what their governments might try to do.”