One of them, Sinisa Sikman, came to Seoul last week to speak at a workshop on how the principles of non-violent struggle, and specific lessons from Eastern Europe, could be applied to the regime in the North. 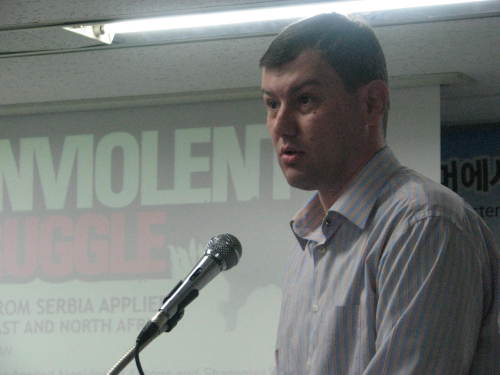 Sikman said that it is important to teach the principles of non-violent resistance around the world because they are not taught in most schools.

“If you want to learn non-violence you are (usually) forced to go to organized religion,” he said.

Sikman became involved in opposing the rule of Slobodan Milosevic in 1991 in Serbia, participating in a protest against the brutal treatment of Milosevic’s opposition. Sikman was not yet a high school graduate at the time, but the struggle against Milosevic would continue for the rest of the decade.

In the late ‘90s, Sikman was among the founding members of Otpor (“Resistance” in Serbian), a youth movement formed to help unite opposition to Milosevic. In the fall of 2000 they finally succeeded in driving him from power.

Sikman, along with other members of the movement that toppled Milosevic, have since been involved in leading workshops and seminars on non-violent resistance, citing statistics that indicate non-violence is more successful at dislodging dictators than taking up arms. Their audiences have included Ukrainians, who would later apply those tactics during the Orange Revolution of 2004 and Egyptians who took part in the rebellion that toppled Hosni Mubarak last year. Materials and information are provided through their site www.canvasopedia.org.

However, Sikman admitted that it would be better if those inside North Korea were able to learn these lessons.

“Revolutions cannot be exported,” Sikman said. “You cannot force changes from the outside.”

In addition to Sikman’s testimony, the workshop included participation from former human rights ambassador from the Ministry of Foreign Affairs and Trade Jhe Seong-ho, political counselor to the British Embassy Alisdair Walker, and Jack Rendler of Amnesty International USA.