Hyundai Motor and Kia Motors are signaling fierce competition with import car brands in a bid to protect their dominant market share at home.

Following Hyundai’s launch of the third-generation Santa Fe in April, its affiliate Kia will unveil the K9, a luxury premium sedan, on May 2.

Hyundai Motor has more than 40 percent of the local market while its affiliate Kia Motors’ market share hovers at 30 percent.

But their position has been challenged by the import car industry, which recently saw its combined market share surpass 10 percent on the back of continual sales growth despite sluggish private consumption in Korea.

In contrast, Hyundai and Kia have been suffering month-on-month sales declines at home since the third quarter of 2011 though they are posting thriving overseas sales. 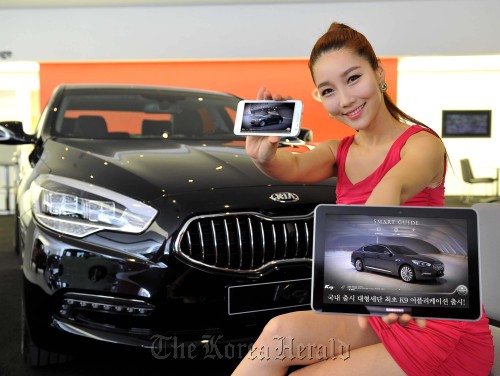 A model shows the “K9 App” which includes information on the functions of Kia Motors’ luxury car to be launched on Wednesday. (Kia Motors)
“Aside from the sagging domestic demand, Hyundai and Kia have no choice but to be closely alert over the situation under the free trade agreements with the EU and the United States,” an import car industry executive said.

He said a key issue is whether Hyundai-Kia will be successful in its sales battle with Japanese automakers such as Toyota Motor, Honda Motor and Nissan.

Toyota Motor is introducing competitively-priced sedans and sport utility vehicles produced in its U.S. factories on the tariff benefits from the Korea-U.S. FTA.

The automotive market is focusing on the coming remarks of Hyundai Motor Group chairman Chung Mong-koo, who is scheduled to participate in the unveiling event for Kia’s K9, slated for Tuesday at the Grand Hyatt Hotel in Seoul.

This will mark the seventh time that the Hyundai-Kia chief will attend a car unveiling event of Kia. The last one was in 2008 when Kia released the Soul.

The bold profile with its simple character lines and innovative rear appearance aims to create a whole new level of luxury car design, according to the automaker.

“For price competitiveness, the price of our popular model, the New Santa Fe 2.0 2WD is set at 30.08 million won,” a Hyundai spokesman said.

“While we raised fuel efficiency and added high-end auto parts worth 18 million won, the price is up only 240,000 won from the second-generation Santa Fe,” he said.