April has been a devastating month for the public image of the Korean National Police Agency. The bungled police response at the start of the month to an emergency call from a kidnap victim who was later murdered sparked public outrage. Public ire was further stoked with the revelation that the police in Suwon had attempted to cover up the extent of their incompetence with “brazen lies,” as described by KNPA commissioner general Cho Hyun-oh.

Criticism of police performance has come also from the very top. Last week, President Lee Myung-bak called for drastic police reform in the wake of the Suwon murder and revelations that officers in Seoul took bribes from room salon operators to turn a blind eye to prostitution.

These and other knocks to the reputation of the force have raised fundamental questions about the performance of the KNPA generally.

Lee Yoon-ho, a professor of police administration at Dongguk University, identifies the lack of promotional opportunities for the average officer as a source of inertia within the force.

The key reason lower-ranked officers struggle to rise through the ranks, Lee said, is that most of the higher positions are filled with fresh graduates of the Korean National Police University in Yongin. The university produces about 120 graduates each year who start out at the lieutenant level. Rank-and-file officers instead must pass a written test, physical and an interview.

In the Suwon case, much attention was paid to the 112 emergency operator’s poor handling of the victim’s call. Here too, Lee sees systemic problems.

“The dispatchers are not getting the appropriate education and training before they are dispatched to 112,” said Lee.

Shortly after the murder, the KNPA announced it would deploy experienced officers to the emergency line, while Cho vowed a “major overhaul.” 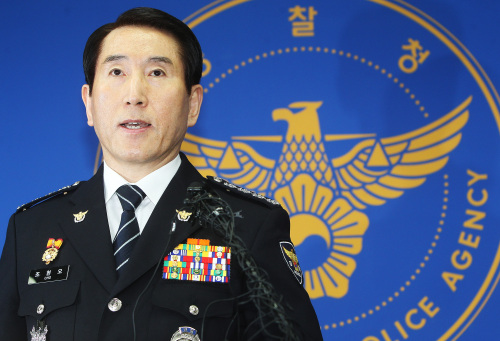 Korean National Police Agency commissioner general Cho Hyun-o apologizes for the police response in the Suwon murder case at a press conference in Seoul in April. (Yonhap News)
A spokesman for the KNPA told The Korea Herald that it plans to increase the training period of operators. He said, however, that neither the timeframe nor the period had been decided and that Korea’s infrastructure for operator training is much less developed than the U.S., where operators undergo one year’s training.

A further impediment to effective policing is public mistrust, according to Dae-Hoon Kwak, an assistant professor at the Department of Criminal Justice Sciences at Illinois State University.

“Although the Korean National Police Agency has consistently tried to change its public image which is shown as an arm of the oppressive government, there has been little improvement in terms of public perception and public support,” Kwak said.

“Moreover, under the current government, these efforts have been gradually diminishing. Also, a couple years ago, South Koreans held candlelight vigils protesting beef import deal with U.S. At that time, the police force abused their power and authority and lots of civilians were arrested and detained because of their voluntary participation for the peaceful protest … I think this is a really serious problem, especially in the community policing era where police are working with citizens in order to respond to various social problems.”

The current training period of eight months is also relatively short by international comparisons, according to Kwak, but a far bigger problem is the recruitment process.

“A written exam ― including constitution law, criminal law, criminal procedural law, history, English and policing ― is the most crucial part of the hiring process rather than physical ability and employment aptitude. I think physical ability and vocational aptitude are more important aspects to be a successful police officer. Especially nowadays, police officers are required to perform a variety of daily tasks from helping citizens to fighting criminals.”

Despite all the criticism directed at the police, official data paints a rather more positive picture. In fact, according to its own statistics, the KNPA is possibly one of the most effective police forces in the world. Its clearance rate, the portion of reported crimes for which charges are brought, for serious crime was 82.2 percent in 2009, far above the U.S., U.K. and Japan with 21.6, 25.6 and 30.2, respectively. Kwak cautioned, however, that the methods used by the KNPA in compiling their statistics, including the use of outdated definitions for investigative departments and crimes, cast doubt on their credibility. Clearance rate definitions can also vary by jurisdiction.

Even that considered, recent crime figures, it could be argued, also speak well of police effectiveness.

“In 2010, an estimated 1,860,687 crimes occurred nationwide, a decrease of 11 percent from the 2009 estimate,” said Kwak. “When considering 10-year trends, the 2010 crime total was 4 percent below the 2001 level. Based on these statistics, it can be concluded that the KNPA has done a decent job to decrease the total crime over the last decade. However, it should be noted that crime rates in other countries have declined as well.”

The effectiveness of the force has also increased significantly in recent years, according to Kwak Dae-Gyung, another professor of police administration at Dongguk University.

As an example, he points to the adoption and tweaking of the Computer Statistics system, or Compstat, first used by the New York City Police Department. Under the system, reports of crime and arrests are inputted into a computer database each week and analyzed to identify established and emerging crime patterns. While research on its precise effect on crime is scarce, its implement in New York and other U.S. cities such as Minneapolis coincided with reductions in crime.

“The Korean system is quite different from the New York system but … now the Korean police agency can utilize computer technology and communication technology,” Kwak said.

In another import from the U.S., Korean police also adopted wider patrol areas in recent years, Kwak said, making for a more efficient use of manpower. More fundamentally, he believes that newer recruits are substantially more competent and suited to the job than many of their older colleagues. He points in particular to the mass hiring of officers with little in the way of training for the 1988 Seoul Olympics, many of whom are in the higher ranks of the force today.

The KNPA spokesman pointed to actions in recent years such as the reorganizing of middle rank officers and hiring more personnel, as well as securing additional funds for investigations and new patrol cars and uniforms.

A number of laws have been strengthened, too, he said, including in the areas of apprehending people under the influence who disturb the peace and collection of information about missing children. Regarding discipline in the force, roughly 1,000 officers, less than 1 percent of the almost 130,000 officers including conscripts in the country, receive some form of sanction each year for transgressions ranging from the minor to the serious.

He noted that the training period for officers was increased from six months to eight last year, while the duration of fieldwork went from four weeks to six. In 2010, new programs were established training officers in investigating, fingerprinting and answering emergency calls.

Dongguk University’s Kwak, who believes the police statistics speak for the effectiveness of the force generally, sees no issue with the current training period of officers. But he does have concerns about political independence.

“Political considerations usually come first when the Korea police office decides on situations because the Korean police system is a centralized, national system. High-ranking police officers are quite sensitive and they try to attune to the opinions of big-power politicians.”

In recent days, in Korea, a number of scandals have been taking place for which most people blame police officers. Some people might argue that it is too extreme of people to criticize police officers for those circumstances. However, it is actually the time for us to consider deeply whether the Korean police are effective or not.

By observing the work and behavior of police officers, it can be said that police officers are actually not that effective. Police are not capable of dealing with emergency situations, and they are not doing a good job investigating a number of cases.

According to the deposition, the police officers actually asked numerous questions unrelated to helping the victim. They asked the victim who was harming her and how a stranger could rape her. Those questions were definitely not necessary to assist her.

The most crucial thing they should have done is to search every location near the place she said on the phone. However, it was revealed that they did not look around enough places to find her. Some just stayed in their patrol car even as she was being raped.

After the case was revealed, the police gave the excuse that the officers who dealt with the Suwon murder case were rookies, so they could not cope with the case well. However, the rest of the police appear to be almost the same as those officers based on other incidents.

One program broadcast on the issue of disappearances of people suggested that there are thousands of people who are still missing in Korea. Worse, police officers are not even investigating them, saying that those cases are too old. This does not make sense at all. By observing the behavior of police officers, we can see that police officers are not doing outstanding work in inquiring into matters. They should transform into a genuine cane of the people. Until now, so many people have been disappointed in police officers’ behavior. They have behaved so irresponsibly, not being able to cover emergency situations and solve a host of cases. It is time for them to show us something.

(The police are) inefficient, plagued by seniority and if you are an English speaker they will in 95 percent of cases be of no use, as getting an interpreter takes hours. The Suwon case was a prime example of police inefficiency and created a public outcry. But was it necessary? Yes, in order to get the eyes on the police so that they can improve.

A two-pronged stereotype (akin to American police officers’ proclivity for donuts) appears to be developing in Korea: that is, they are inefficient and corrupt. Unfortunately, many stereotypes develop from some grain of truth, as appears to be the case with both American police officers and their Korean counterparts. Just as not all American police officers eat donuts, not all Korean police officers take bribes from room salon operators and prostitution and illegally change their addresses. But some do. As a position of high responsibility (up there with lawmakers and public officials) zero is the only acceptable figure for corruption. As for efficiency (which is of course compromised by corruption anyway), especially in the case of dealing with sex crimes, the Korean police should be leading the way on changing public attitudes to domestic violence ― by focusing on the “violence” side, rather than the “domestic” side. From my own general experience, the police often don’t bother enforcing laws that they consider “lesser” and bothersome. I often see people parked in no parking zones on main streets and the police just honk their horn at the car, but if there is nobody in the car, they will just drive on. If they start enforcing the smaller laws immediately, they will soon increase their efficiency.