Korea’s children are ethically and culturally diverse as never before. There were more than 151,000 children of mixed ethnicity in the country last year, a more than 350 percent rise since 2007.

With many arriving from overseas in their teens, language and cultural barriers are a challenge to succeeding in school. About 30 percent of children with a foreign parent are outside the school system entirely, according to the Ministry of Education, Science and Technology.

Against this backdrop, the Education Ministry in March opened high schools in Seoul and Jaecheon, North Chungcheong, for such children. Seoul Dasom High School has 48 students who grew up overseas and have a foreign parent. While the school currently caters to children raised abroad, it plans to accept those born in Korea to a foreign parent in the near future.

“… There are students who came to Korea after a certain period in their home country, and therefore, have difficulties in adjusting to general schools in Korea,” an Education Ministry spokesperson told Voice in a statement.

“To help these students, Dasom Schools opened in Seoul and North Chungcheong Province in March 2012. The Dasom School is a public school for students from different ethnic backgrounds and provides language, cultural and technical education. Its diploma is recognized as a high school diploma. Next year, another Dasom school will open in Incheon. As such, the government of Korea is assisting multicultural students to grow into healthy citizens. It is also providing various support to help them become global talents by nourishing bilingual potential and enhancing multicultural sensitivity.”

But some fear that such schools could do more to entrench divisions than mend them. Popular blogger Robert Koehler, a 15-year resident married to a Mongolian woman here, shares such concerns.

“I’d be concerned that they’re putting themselves at a disadvantage in Korea by not attending normal schools and that by associating only with students of mixed racial backgrounds, it would impede their development as members of Korean society. As a taxpayer, I’d also ask why the government was spending money so that Korean nationals can learn pride in being non-Korean. If individual families want to instill pride in a certain foreign cultural heritage, fine ― I imagine my family (which is) German/Irish-American and Mongolian will. But that’s not something the state should be doing,” he said. 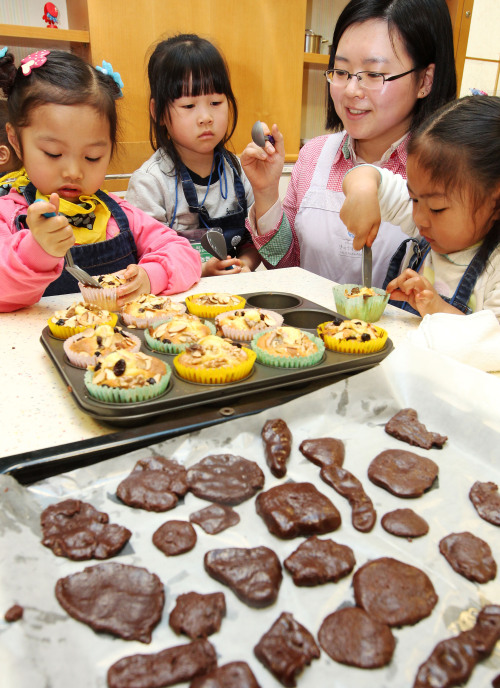 The government has opened a number of schools for multi-ethnic children such as those pictured above at an event at the Korea Food Research Institute at Sookmyung University in Seoul. (Yonhap News)
Koehler, who has no kids “yet,” also wonders whether grouping multiethnic children together could engender racial resentment.

“Put multicultural kids all together, add a few ideologically sympathetic teachers, and dollars to donuts you’ll turn the classroom into a cesspool of identity and grievance politics. And Korean-Korean parents and their kids will nurse grievances because the ‘foreign’ kids are being treated ‘special.’”

Park Kyung-tae, a sociology professor at Seoul’s Sungkonghoe University who specializes in multiculturalism, also has doubts.

“Although the facility is good, it has only symbolic meaning that Korean society is doing a good job to include those multicultural kids. But that is a very, very small number and special cases only,” he said.

He believes all schools should be multicultural in so far as having diverse student bodies and educational support for students struggling to fit in.

Skeptical voices have even arisen within the government itself.

Last year, in a statement to The Korea Herald, the Ministry of Gender Equality and Family, which also deals with multicultural matters, expressed its opposition to so-called multicultural schools.

“The establishment of a separate school, class and after school activities for children with multicultural backgrounds is not viewed as an appropriate measure for the children of multicultural families,” it said.

At the time, the Education Ministry insisted the school policy had been pursued with the endorsement of the Gender Minister, something expressly denied by the latter.

A spokeswoman for the Gender Ministry reiterated its earlier position on Thursday, saying it was against separate schools because “(students) have to adjust to this society because their nationality is Korean.”

She expressed surprise that the Education Ministry had claimed to have pursued the school policy with her ministry’s agreement, saying she would “check with the Ministry of Education.”

The Education Ministry declined last week to answer questions about the number of such schools it ultimately intended to establish, but stressed that the schools were for only a small proportion of students.

“The government of Korea seeks an ‘integrated education,’ in which students from different ethnic backgrounds are allowed to choose which elementary, middle, or high school to go to. Accordingly, most ‘multicultural students’ are enrolled in general schools,” it said.

In addition to the specialized schools, the ministry has also introduced a number of six-month preparatory programs in the Korean language and culture to ready students for entry into regular classes. It plans to have 26 of these programs in place within the year.

Seong Sang-hwan, of the Education Ministry-funded National Center for Multicultural Education, appreciates the concerns regarding division. But he believes such schools are a necessary, if temporary, measure.

“These kids, they have trouble in regular Korean schools because regular schools, they are not ready to accept these kids. These schools should be regarded as some kind of stepping stone to transfer to regular schools …We have to watch these schools closely but at the moment I think this move is OK. I think it is acceptable,” Seong said.

Seong believes that the success of immigrants greatly depends on their own efforts to integrate into their new community, a view informed by his own experience as an immigrant first to the U.S. and then to Germany.

“I think the incoming immigrants, they have to participate in the school life, or school activities, social activities and so on. In this way you are accepted more and more … if you stay aloof from the mainstream then you are very unhappy and you don’t get to know people there. And you don’t get to know the friends of your kids and so. I think that’s very tragic,” he said.

He relates the story of a Chinese immigrant he met as part of field research for his center. Her mother-in-law had forbidden her from attending Korean classes, preferring her to stay at home.

“This Chinese woman could not speak Korean that well. As soon as she was allowed to attend regular official Korean classes offered by the Ministry of Gender Equality and Family … she was exposed to this new environment and she started picking up excellent Korean very quickly. And then she was offered a Chinese teaching position as well,” Seong said.

“Basically, it should be ‘salad bowl’ but what is important is the contents and quality of ‘salad bowl,’” he said.

Korea today has more than 1 million foreigners, and many marriages in some areas are between Koreans and foreigners. I think the problem will be a lack of multicultural schools and effective multicultural curriculum. The Korean people need to decide on what their definition of multiculturalism is. Korea isn’t the U.S. or France or even China; it needs a solution that fits the current reality and the future reality of reunification. Korea also has a lot of trade relations, which makes multicultural education critical to maintaining and strengthening trade ties, or in layman terms, avoiding cultural landmines (like blackface on TV shows). To perform any sort of multicultural education well, educators here need to teach that diversity is a strength, not a weakness, and that any Korean citizen can be a great Korean citizen regardless of their skin color.

Finally, educators must teach the hardest question: What is the “Korean Dream?” There is an “American Dream,” a “French Dream,” and a “South African Dream” that immigrants and citizens can pursue. Koreans of multicultural background will want to achieve the Korean Dream as well, whatever it may be.

Learning about the culture of the country which you are staying in is always a good idea; it shows respect and appreciation to the people of that country. Culture is to be shared among people to give a broader understanding to reduce friction in society. The Korean language in itself can however prove too difficult for a lot of foreigners, but at least they should try and acquire basic skills in Korean.


I think multicultural schools are like a bomb waiting to explode. This is not because of their personality. This is because of the environment. Koreans usually have some sense of superiority to other Asian countries. This makes Koreans not hang out with other Asians. This also can be adapted to multicultural schools. They seem like water and oil.

What we need is to change this arrogant attitude and to communicate with them. Talk, and understand each other.

It seems that water and oil cannot be one, but when someone shakes them very hard, they appear as one.

(Multicultural schools are) a very good idea! (They) allow people from different cultural backgrounds to be exposed to one another. To not only learn about their differences, but also to learn about their similarities.

On the Suwon rape and murder ...

Disgusting. Violent crime in progress and cops wait 13 hours to find her. Then cops try cover it all up!

The fact that it was referred to as “a simple rape case” by police, I think, says a lot about police attitude(s) toward women.