Sunchang, North Jeolla Province, is known for its excellent gochujang, or hot pepper paste. As households increasingly purchase ready-made gochujang rather than make their own at home, Sunchang has become synonymous with gochujang, with many gochujang brands using the name Sunchang on their products.

At Sunchang Traditional Gochujang Folk Village, gochujang artisans who use the traditional methods of making the highest quality hot pepper paste continue to practice their craft.

Here, it is a common sight to see a hanok, or traditional Korean house, with its courtyard filled with numerous onggi jars made of earthenware containing gochujang and vegetables pickled in gochujang. 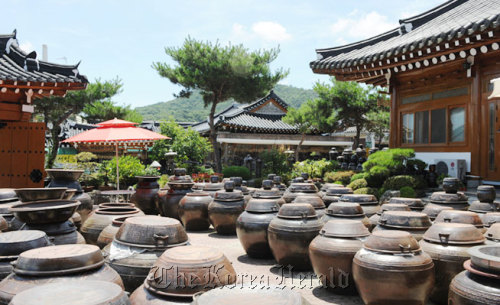 Jars containing gochujang fill the courtyard at a house in Sunchang Traditional Gochujang Folk Village. (Sunchang County)
Sunchang gochujang is famous for its flavorful taste but it is also packed with protein, amino nitrogen, lactobacilli and fiber. Made using recipes handed down generations, Sunchang gochujang made here does not contain preservatives or artificial flavorings.

Located across from the Sunchang Traditional Gochujang Folk Village is the Sunchang Jangryu Museum. The museum is home to all things gochujang, including information and data on different types of paste.

Every October Sunchang hosts a festival dedicated to gochujang and fermented soybean products where visitors can sample and stock up on the staples of every Korean pantry.

Suchang is also known for the longevity of its residents. According to a 2002 government survey, the county had the highest number of citizens over 85 years old in the country. In 2003 Sunchang was selected and introduced as a World Longevity Village by Time Magazine.

The mild weather, healthy diet rich in various fermented pastes ― the county produces 38 percent of fermented soybean sauces in Korea ― and the active lifestyle of the farmers have been cited as reasons for the longevity of its residents.

The pristine surroundings ― Sunchang is a mountainous region with Gangcheon Mountain to the west and Hoemun Mountain to the east ― is also an important factor contributing to the longevity of the residents.