“Dongdaemun is a neat area to be in and since the city is growing that way, we are positioned perfectly as it continues to expand,” Craig Smith, chief operating officer of Marriott International’s Asia Pacific operation, told The Korea Herald in a recent interview. He was in Seoul last week to check on the Korean market, the second-highest in revenue and business performance in Asia after Hong Kong.

The new JW Marriott Hotel being built in the city’s emerging fashion and design district will be a smaller boutique hotel with a “very modern and warm” concept.

“It is (made of) all upper hand fabric, products, good use of wood and stone in the rooms, and open bathroom and sky bar. It will be a really cool place to hang out,” he said. “It is going to be really popular for weddings too.” 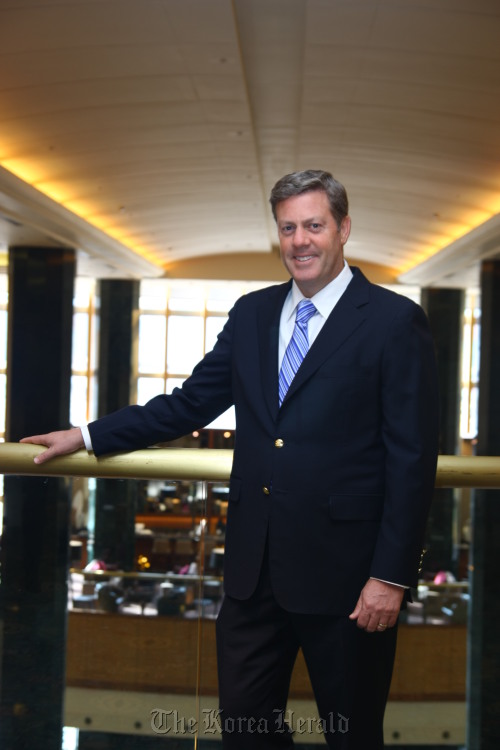 Craig Smith, chief operation officer of Marriott International’s Asia Pacific operation (JW Marriott)
The hotel with 10 floors above ground and six underground, will have 170 rooms, less than half of that of the JW Marriott in Central City in Gangnam, south of the Han River.

In addition to the Dongdaemun location, Marriott International plans to build more hotels in and out of the capital and also its first resort facility in Korea.

“We have a great desire to have hotels outside of Seoul but also more in Seoul.

“We have developers looking for more hotels because there is so much going on here. We need to be in the south, in Busan and Incheon as well,” Smith said.

The global hotel brand plans to build 110 hotels in the Asia Pacific by 2015, including “one in Bhutan and a Bulgari resort in Shanghai.” It currently has 140 hotels and resorts in the region. Smith, in charge of Marriott’s Asia Pacific operations, is also in charge of the company’s ambitious expansion project.

“We are focusing on intra-Asia business. It is much more interesting, dynamic but harder,” he said.

“For example, we make sure that people have multiple choices of Korean dishes for people from overseas to experience what Korean food is about.”

Smith gave credit not only to the “sophisticated and talented client base in Korea,” but also to the Korean government in promoting its culture and tourism.

“There are a lot of governments around the world talking about promoting tourism but there are not many that actually do it. Here you have the Olympics coming up, you’ve got the expo and you’ve got Formula 1 now and hallyu, Korean Wave,” he said.