Perhaps they should be ― the resource-rich republic provides more than 30 percent of Korea’s uranium, and is being eyed by Korean firms for its oil deposits in the Caspian Sea.

“In the ‘90s, Koreans did not know much about Kazakhstan,” said Bakishev, who served as ambassador in 2006, and has just returned to Seoul for another diplomatic round.

“After four years of the independence of my country, people would say ‘please say the name again’ because they didn’t know where Kazakhstan was and what country, but today, surprisingly, Koreans know a lot about Kazakhstan because the country has also been growing successfully.”

Kazakhstan’s per capita GDP recently topped $10,000 ― a significant figure compared to other countries in the region.

And the world’s largest exporter of uranium is now providing a large chunk of Korea’s energy supply.

“We export more than 30 percent of uranium globally and for Korea it is the same situation ― over 30 percent (of its uranium comes from Kazakhstan),” Bakishev said.

“In plain language, I think if you have six light bulbs in Korea ― one of those is working on Kazakhstani power.”

Holding 15 percent of the world’s uranium resources, Kazakhstan accounted for about 35 percent of global production in 2011. It is planning further increases from the 19,450 tons produced last year, and also aims to develop its own nuclear power industry with light-water reactors for the southern region.

Kazakhstan gave up its nuclear arsenal and closed the Semipalatinsk nuclear test site in 1991, but hundreds of previous explosions and nuclear tests have led to thousands of early deaths from exposure to radioactive fallout.

But President Nursultan Nazarbayev reported at the Seoul Nuclear Security Summit in March that loose nuclear material at the site had been secured.

“In terms of the security of uranium and the nuclear facilities I must emphasize that we have no question on the part of IAEA or major international players,” Bakishev said. 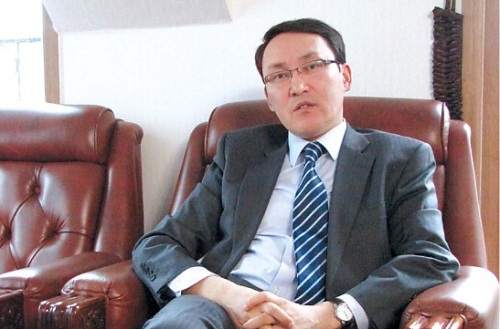 Returning Kazakhstani Ambassador Dulat Bakishev speaks to The Korea Herald. (Kirsty Taylor/The Korea Herald)
“Kazakhstan has gained trust and confidence and we would like to contribute more wherever it is possible to security at a regional and global level.

“We are sure that no one is questioning our seriousness and our reliability.”

As well as nuclear fuel, Korea is also looking to Kazakhstan for oil and gas.

The largest project is a Korean consortium investing in the ongoing Caspian Oil Project to develop the Zhambyl oil field, estimated to hold 1 billion barrels of crude oil.

Korea’s SK Corporation, LG International, Samsung and Daesung Industrial are all investing in the project in spite of the logistical difficulties of bringing oil here from the landlocked nation.

“The key issue here is how to deliver, but there are so many ways to look at the matter,” Bakishev added. “First is selling there and buying somewhere else, the second is swap operations, giving from there and taking from another place. Korea is free to choose if we have no restrictions and limitations concerning this we have an open market and many partner countries working in Kazakhstani oil and gas fields. I see that the issue is security and Kazakhstan is assisting Korea in achieving that goal.”

Partly thanks to foreign investment in its oil resources, Kazakhstan enjoyed an average of 8 percent year-on-year economic growth throughout the last decade. But the government is also eager to diversify and modernize its industries into areas such as technology and R&D.

Bakishev aims to use this ambassadorship to diversify Astana’s cooperation with Seoul.

He has returned to Korea as Kazakhstan and Korea celebrate 20 years of diplomatic relations this year.

“This is an important time for me as ambassador and our country’s embassy to sustain the momentum and find new niches for new projects,” he said.

The ambassador said that 38 economic projects are under consideration between the two countries, marking up a potential $7 billion in investment from Korea.

He added that though geographical distance has kept trade relations between the two countries below investments, bilateral trade has now topped $1 billion.

“I think we could expand more and I am sure that trade relations will expand taking into account the numerous projects here and especially in Kazakhstan. Korean companies are interested in building plants, construction projects, petrochemicals, of course the oil and gas industry. I am sure with the implementation of these contracts and projects the trade will increase.

“Now with development and modernization of Kazakhstan and further advancement of Korea as a global player, I think we have new opportunities to diversify our cooperation. We are going to have more projects in innovation and high technology, new technology areas.”

Two joint research centers opened in Korea and Kazakhstan late last year to help companies from the two nations cooperate, with one early result being screen golf technology soon to be exported to Kazakhstan and surrounding countries.