After overseeing Key’s trip for the Seoul Nuclear Security Summit and presenting his credentials to President Lee Myung-bak in March, Rata joined Seoul baseball team the Wolfhounds for his first game, and plans to make the games a regular feature.

“As well, I have joined a local baseball league and enjoyed playing my first game last weekend. I was placed in the outfield and managed three turns at bat,” he said. 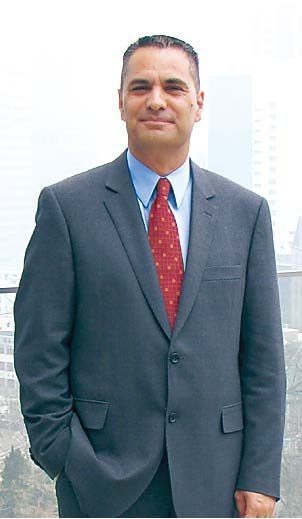 New Zealand Ambassador Patrick Rata. (Kirsty Taylor/The Korea Herald)
On more businesslike matters, the ambassador who has been here for almost two months is determined to conclude talks on a Korea-New Zealand FTA within the year.

Rata was head of the Koreas and Japan Unit at the New Zealand Ministry of Foreign Affairs and Trade from 2009-2010 and was also a senior official at the World Trade Organization for 10 years.

The trade relations expert said that he would do everything possible to realize the FTA for which negotiations were first launched by Lee and Key in 2009.

Talks on the pact had faltered over issues including Korean farmers’ anxiety over increased agricultural imports from New Zealand, but the country has frequently stressed that the pact would not damage Korea’s interests.

“Both Korea and New Zealand are trading nations. There are strong trade and investment ties, but there is also significant scope to advance the trade side of the relationship,” Rata said.

Korea is New Zealand’s fifth-largest bilateral trading partner with two-way trade totaling $3.46 billion in 2011. The trade is quite evenly balanced with New Zealand exporting logs, aluminum, beef, kiwifruit, dairy and seafood products to Korea, and taking imports of items such as cars, electronic equipment and machinery from here.

“An FTA will be win-win for both countries,” said Rata. “It will give a boost to our economies. It will give Koreans and New Zealanders better access to the products they need, at a cheaper price. It will create new opportunities for our respective exporters. And, overall, it will help to build the commercial links that will take our trade and economic relationship to the next level.”

New Zealand companies have been set at a disadvantage to European and U.S. companies now benefiting from recently-signed FTAs with Korea.

But Rata pledged to build upon recent work done by Key and Lee to resolve this.

“The two leaders are committed to the goal of an FTA and both recognize the importance of achieving freer trade between our two countries. Negotiations will remain in contact over the coming months to discuss and identify a way forward in negotiations,” Rata said.

He pledged to do everything in his power to reassure the Korean public and convince them of the FTA’s worth through public talks and events.

“FTAs are always complex because they cover complex commercial and trading issues like trade in goods, trade in services, investment and technical and other barriers to trade,” he said.

“Sometimes FTAs also take time to conclude because they may touch on issues or sectors that can be politically sensitive. In Korea, agriculture is often identified as a sensitive area.

Concluding an agreement requires that the FTA provide gains for both countries.”

He wanted to continue to foster and enhance the unique and close bilateral relationship as well as further developing more contemporary strands of the relationship in areas of education, tourism, science, research and development, adding that there were further opportunities for collaboration in climate change and other regional and global issues.