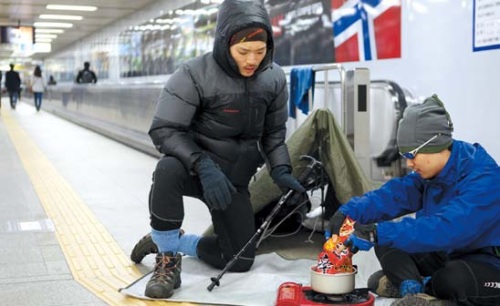 Winning entrant Lee Jong-jin “camps out” with a friend at Seoul’s Samgakji Subway Station for the Norwegian Embassy’s competition.
Two Korean students are set to fly to Norway after coming first in a photography competition.

Hundreds of images were entered into the contest for Seoul commuters to snap themselves in creative poses in front of promotional images of the Scandinavian country at Seoul’s Samgakji Subway Station.

The idea for the competition was sparked when Travelro website producer Rhee Kang-hee started snapping pictures with friends wearing snow gear in front of the images of Norway’s fjords, snow scapes and wildlife.

After he showed the photos to someone linked to the embassy, the contest to “pretend you are in Norway” was born.

Short listed entries included images of people wearing Viking helmets, pretending to ski or snowboard or dressed as polar bears in front of the stunning scenes.

But Jung’s winning shots showed how she had made travel postcards from the Norwegian displays, and Lee’s portrayed how he had pitched a tent in front of the station’s Nordic scenes.

The winners and 24 runners-up gathered at Ambassador Torbjorn Holthe’s residence on Thursday to collect their prizes ranging from plane tickets to Norwegian music CDs.