The sign marked the starting point of our 10-day walk through the Cotswolds, along a trail that loosely follows the route that monks in ancient times walked each year to pay tribute to Bath Abbey. My husband, Carl, and I had been planning the trip for months, but as we set off on an overcast day in late April, we were both nervous. Were we really up to 10 consecutive days of hilly walking?

We had chosen the Cotswold Way, one of Britain’s well-maintained National Trails, because the region of rolling hills and charming villages has been designated an “area of outstanding beauty” and because it has an excellent infrastructure for walkers. Towns are spaced walking-distance apart, with an abundance of restaurants and lodgings. Most important: I’d found a luggage service that would take our bags from town to town so that we had to carry only what we needed for the day.

England has an extensive network of well-marked footpaths and bridle ways, many of them dating back centuries, and the public has the right to travel them even when they cross private land. Much of the Cotswold Way is on these trails, and our first day’s walk, a short five miles up and over the Cotswold escarpment to the picturesque village of Broadway, got us accustomed to the stiles and kissing gates that allow humans access but keep livestock from escaping.

We also got our first taste of the Cotswolds’ many joys ― well-tended fields of bright-yellow rapeseed, newborn lambs frolicking in verdant pastures, abundant bird life, hardwood forests carpeted with bluebells and vistas that seemed to stretch forever. By the time we got to Broadway, we were feeling far more confident about the trip.

Over the days that followed, we fell into a pleasant rhythm. Up at 7, a hearty breakfast by 7:30, packed and on the trail by 8:30. One of the joys of a long-distance walk is that every step is new territory: There’s no retracing your steps. And we quickly embraced the zeitgeist of the Cotswold Way, putting one foot in front of the other and seeing where that took us.

Because the villages tend to be at the bottoms of hills, while the Cotswold Way runs largely along the ridges, most days started with a climb. If we saw a monument on a distant hillside, we knew we would be standing next to it at some point. If there was an ancient burial mound, an Iron Age hill fort, a particularly scenic overlook, our route was sure to include it. We walked through pastures with cows by the dozens (including a bull or two) and sheep by the hundreds, following frequent way-markers that made getting lost nearly impossible. We were fortunate in the weather, with no rain to speak of, and never during 10 days of five- to seven-hour walks was there a morning we wished we could beg off, never a moment along the trail when we wished we were doing something else. 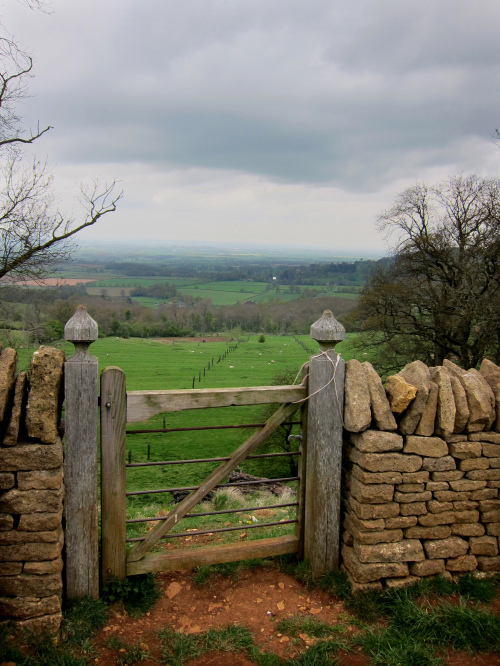 Walkers through England’s Cotswolds pass through gates in the region’s stone walls. (Los Angeles Times/MCT)
Each day brought some unexpected pleasure. In the town of Dursley, we had a delicious lunch of homemade soup and bread just out of the oven at the Old Spot Inn, named Britain’s pub of the year in 2007. In a cemetery in the town of Horton, I found dozens of headstones bearing my family name. In the tranquil village of Painswick, we walked in the churchyard among its 99 topiary yew trees, each of which has been adopted by one of the town’s residents.

We had daily conversations with locals who lived along the trail or were out walking dogs or picking wildflowers. And we answered the same questions again and again: Had we trained for the walk? (Yes, by going for regular long walks on weekends, building to a couple of 13-milers.) Did we have blisters? (No, but only because we’d broken in our boots well before we left home, and because on the trail we were careful to stop any time we felt the slightest twinge and put on blister pads.) Were we sore? (Only for the first couple of days.)

On the steepest climb of the trip, to the top of Cleeve Hill, we met a British couple who were also walking to Bath and knew all sorts of local lore. They told us how the Cotswolds grew wealthy during the Middle Ages from the wool trade, and how, when competition from Italy began infringing on profits, the wealthy wool merchants got a law passed requiring that England’s dead be buried in wool shrouds.

You can book Cotswold Way tours that arrange lodgings for you. But I had been determined to plan the trip myself, and the National Trails website had made that relatively easy. Still, we were never sure what kind of place we’d find ourselves in at the end of the day.

We were, in general, pleasantly surprised. In the Saxon-era town of Winchcombe, we stayed at Wesley House, named after the founder of the Methodist church, John Wesley, who stayed at the inn twice during the 1700s. We had to duck our head to get in or out of the bathroom but had a splendid meal in the restaurant downstairs.

In Painswick, we stayed at Byfield House, part of which dates to the Tudor era. The owners rent several rooms in their spectacular home, in part to support the upkeep of the historic property and in part to get to know the people who pass through.

Outside Cheltenham, we trudged up a long dirt road to California Farm, an immaculately restored farmhouse where our room looked out over deep green farmland, forests and fields that once a year are covered with California poppies, first planted centuries ago, that give the farm its name.

Only one night’s lodging was a disappointment. In the lovely village of Wotton-Under-Edge, we’d booked at the Swan Hotel, which looked in pictures like a typical small historic hotel. To be fair, it was undergoing renovations, and we were the only guests the night we stayed. But the room was tired, the bathroom corners grimy and the noise from the pub below continued late into the night. We were glad to be out the next morning.

Food was generally quite good ― but of course we were hungry. Pub grub was hardy but basic, and we twice had excellent Indian food. In Painswick, we dined lavishly at Cotswold 88, which changes its menu daily depending on what is available from local farms. After having walked for much of that day through forests that smelled strongly of the wild garlic known as ramps, we had pea soup infused with them, followed by slow-cooked local lamb ― and, yes, we felt guilty about eating it after having gotten to know many of the neighborhood sheep.

For our final nights in Bath, we had splurged by booking a room at the elegant Priory Hotel. But as we approached the city, we found ourselves dawdling. In hours of walking each day, we had gotten to know the countryside intimately. We had learned to identify the pungent aroma of ramps, the cheerful song of the British robin, the worried bleat of a lamb separated from its mother. We had transported ourselves 100 miles at the speed humans were intended to travel. And we weren’t quite ready for the journey to end.

We decided to check into our hotel on the town’s outskirts and save a short leg for the next day. On our way into the city that final morning, we slowed to take pictures, to admire the Georgian architecture, to window-shop. But all too soon it was over. We triumphantly laid hands on the door of Bath Abbey. And, on the walk back to our hotel, we began planning our next long trek.