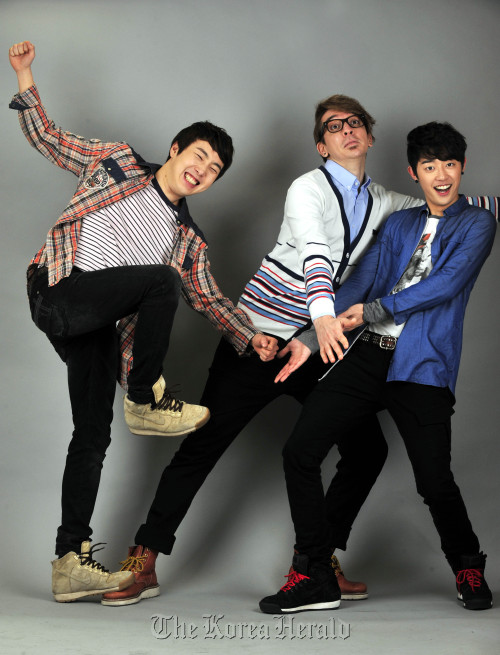 
Busker Busker, who rose to fame through Mnet’s “Superstar K3,” became the talk of the town when the band swept the K-pop charts after the release of their debut album late last month.

As of April 7, eight songs from their album “Busker Busker” ranked among the top 10 on Olleh Music’s weekly chart, easily beating out popular local stars. The album also ranked top on Billboard’s K-pop Hot 100 album chart on the same day, setting an example for how an indie band can takeover the country’s music scene long-dominated by dance tracks and K-pop groups.

The Korea Herald met the three members of the group ― Jang Beom-joon on vocals and guitar, Brad Moore on drums and Kim Hyeong-tae on bass ― on Monday and asked how they feel about getting so much attention from within and outside of the country, and also their future as a band.

“Up to the album debut, we were very nervous because we had never released our own songs. They were all cover songs. But after the album started selling well and performing well in the chart, we have been so excited. It blew all of our expectations away,” said Moore, a 27-year-old former English lecturer who goes by his stage name Brad.

The band’s leader Jang said they are very grateful for all the supports but are still in the process of learning.

“I don’t think that it is a perfectly well-made album because we are still rookies (in the musical scene). I’m doing this because I believe there’s something to learn, like my mom says, like going to school,” said Jang who wrote all of the 11 songs even before the band competed in the talent show last year.

The songs have been rearranged with strings, keyboards, drums and electronic guitars for the album, making Jang’s initially acoustic music bigger-sounding than ever before.

On the album, the trio delivers fresh, creative sounds as well as somewhat old-fashioned but passionate lyrics. The title song “Cherry Blossom Ending,” and other songs such as “First Love,” “Spring Wind” and “Alleyway,” mostly about painful but unforgettable love, are gaining popularity particularly among those in their 20s and 30s.

Where does Jang get his inspiration?

“From girls (who I dated and broke up with),” he said without hesitation.

“To sing songs about breaking up, I needed to have had such experiences. I dated as much as I could to deliver love pains. That doesn’t mean I dated a lot, trust me,” laughed the 22-year-old artist with a unique voice. Jang added that he looks up to Korean rock band Sister’s Barbershop.

“I was surprised when listening to their song ‘The Beautiful Thing,’ and their way of playing music for a long time. I like their lyrics and melodies. That’s what I want to pursue,” he said.

Asked what specific genre they want to perform in the future, Jang cautiously said that he wants music that people would like to listen to and have fun with, regardless of age.

“I don’t think I can establish a certain music genre, but it should be fun. Even if I get over 40, I could do rapping. If people find it interesting and fun, that is what I want to do,” Jang said.

The trio will hold their first solo concerts in major cities in Korea, starting May 4 at Yonsei Culture and Arts Center in Seoul. The tickets for the three-day concerts in Seoul were sold out in 15 minutes, according to reports. The band will also make forays overseas as well. They are to perform at M Countdown Hello Japan on April 25.

The band is an interesting combination ― a man from Ohio who taught English at Sangmyeong University’s Cheonan Campus, and two Korean students majoring in animation at the same university.

Brad, who has now quit his stable college job to join the band, remembers Kim and Jang playing “amazing music” on the streets of Cheonan.

“Three kids were sitting on a bench, nobody was watching, people were just walking by. And they were playing amazing music, so we sat a little bit to listen and gave them some money, and they were really thankful,” said Brad who came to Korea to teach English in 2008 with his girlfriend.

Kim, who was then taking an English conversation class taught by Brad, recognized his teacher and learned that he plays drums. During the class, Kim asked Brad to join the band. A week later, they signed up for Superstar K season 3.

Nobody, not even the trio themselves, expected the then five-month-old band to make it all the way to the final stage of the show with a prize of 500 million won.

Even when the indie band lost the top prize to Ulala Session, the vocal-oriented quartet in the finale of the show, they were not disappointed, but happy to go back home.

“I was so happy to go home. Our life could have become much more difficult if we had won the show. I am glad we didn’t,” said Kim, the youngest of the three.

The band, however, disappointed many fans after their decision to withdraw from the music scene indefinitely late last year, saying that they needed more time to think about their future as a team.

“During the eight weeks on the show, we really didn’t have time to think because the broadcast schedule was too hectic. We were lucky to have that break. We’re able to reorganize our thoughts and what we wanted to have in life and music,” Brad said.

The trio, however, admitted that they’ve had a “few” clashes over different music styles. But even though they cannot fully communicate well either in English or Korean, and may have different music tastes, they are on their way to understanding each other.

“Beom-joon’s is a very unique style of singing and guitar and it was little difficult at first to mesh in because he has a bounce rhythm whereas my rhythm is more straight.

“We still struggle sometimes, even today, to figure out the best way to make our sound mesh. But in this album with nine full songs, it meshed well,” Brad said.

Jang, who asked what the word “mesh” means, agreed.

“Like Brad said, we have different music styles. But I want to see how those differences come together and create a new sound,” Jang said.