The Gimpo city government and the military cut down barbed wire fences on a 300-meter stretch along the Han River south bank near Gimpo Bridge.

The city and the military will tear down another 1 kilometer of fences upstream by Thursday. 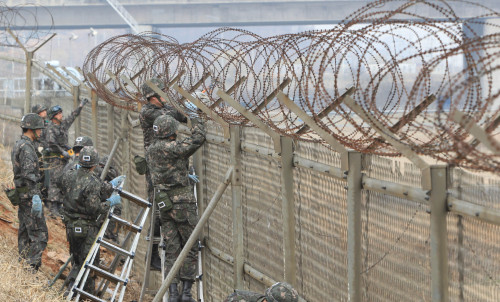 Soldiers dismantle the fencing along the southern bank of the Han River in Gimpo on Monday. (Yonhap News)
Along with Gimpo, the government of Goyang on the opposite side of the river and the military will begin removing 3 kilometers of fencing from April 19.

The authorities plan to build bicycle paths and other facilities in the areas affected.

The lower reaches of the river are lined with steel fences on both sides as part of security measures against North Korea.

The fences were installed in the 1960s to prevent North Korean spies from entering Korea but with the inter-Korean relations improving during the 1990s, there was criticism that they spoiled the landscape.

As such, the concerned cities drew up plans for replacing the fences with surveillance equipment, such as closed circuit television, in 2008.