ULSAN ― It’s spring, and if you are itching to get out of town, Ulsan could be an ideal place to spend a weekend.

This suggestion may raise some eyebrows because Ulsan is a city known for its heavy industries. But sometimes one needs to see what’s happening on the far edge of the country, and there is something special about visiting this coastal city at this time of the year.

Ulsan has been a driving force behind the country’s industrialization since the 1960s, with producers of automobiles and ships, plus oil refineries located in the port city.

But this time, a group of travelers are here to see not the towering cranes and massive shipyards, but living creatures: whales and dolphins. 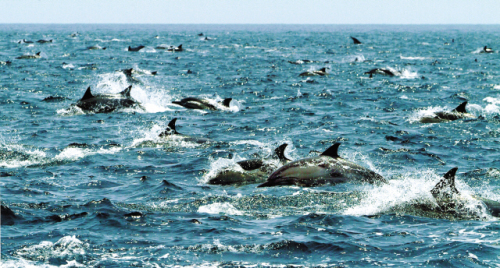 Common dolphins swim near Ulsan’s coast. (Whale Cultural Foundation)
It was a clear day off the Jangsaengpo Port in Ulsan last weekend as our boat headed off in search of the regular visitors to the coast around this time of year.

“We’re hoping for nice and calm waves this time,” our tour guide said before stepping aboard. “We’ve been unlucky. We didn’t get to see them last week. But we’re keeping our fingers crossed this time.”

But our hope soon turned into disappointment just 30 minutes after we set off as we had to turn back to port due to heavy winds and high waves.

“The boat is too small. When the waves rise high, it can be really dangerous in the East Sea,” boat captain Lee Yong-woo said.

Whales generally can be seen some 20-30 kilometers off Ulsan’s coast from April through mid-June. If the conditions are right, these whales are seen very close to shore and from many of the same locations, Lee explained.

“You can see lots of dolphins here as they usually swim as a group. If lucky, you can also see a couple of minke whales,” Lee said.

But the probability of seeing the sea mammals here is about three out of 10, as the weather is fickle in the springtime, he added.

Jangsaengpo is now a famous spot for whale-watching in Korea. But the small port actually has a long history in whaling.

The first whaling company was set up in Jangsaengpo in 1891 by the Russian Empire, and the port became a center of the whaling industry after Japan took over during the Russo-Japanese War.

Before Korea embraced the 1986 global whaling moratorium, there were about 20 whaling ships in Jangsaengpo.

But now it is illegal to capture whales in Korea, and violators may be jailed for up to three years or fined a maximum of 20 million won ($17,700).

“When I was working on a whaling ship, I could see them whenever I went out. I often saw minke whales, and even bigger gray whales,” said Kim Young-hak, 61.

“Whales are very gentle and friendly creatures. They don’t mind even when people get close to them.” 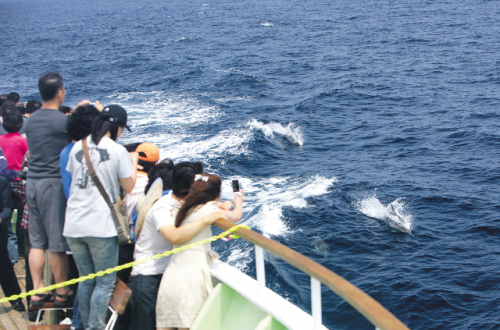 People watch dolphins from a cruise ship from Jangsaengpo Port, Ulsan. (Whale Cultural Foundation)
Although whaling is strictly forbidden here, one can still get up close to the sea mammals in Ulsan. Since 2009, the port city has been operating a cruise boat every weekend during the whale-watching season.

If you want to visit Ulsan, this the perfect time as the city hosts its annual whale festival this month.

Now in its 18th year, the annual festival has grown from a small exhibition to a jam-packed four-day event, attracting tens of hundreds of visitors every year.

“We first started as a very small event to help spread awareness about whales and the tradition of our town,” said Choi Nak-yeun, executive director of Whale Cultural Foundation.

The festival has now become a huge community celebration with more than 40 activities taking place across Ulsan, including a whale-themed family musical, drama performances, a reenactment of the traditional method of whaling and also a singing competition.

The Whale Cultural Foundation also holds whale-watching trips every day during the four-day fest, which is scheduled from April 26-29 this year, the director said.

“We’re hoping to make it bigger to bring in more visitors.”

No luck on a whale cruise? Take a short walk along the Jangsaengpo port, and you can find the country’s first and only whale museum.

Opened in 2005, the Jangsaengpo Whale Museum stands on what used to be the center of the Korean whaling industry.

The museum has on display a collection of more than 250 artifacts from whalers, who have been rapidly disappearing since 1986.

A whaling ship, which was in commission until 1986, now sits in front of the museum, allowing visitors to feel as if they were on board to catch a whale.

Inside the museum, visitors can also see the skeleton of a killer whale that stretches 7.4 meters and also a life-size model of gray whale measuring 13.5 meters in length.

The museum also opened a dolphin aquarium in 2005, which has five dolphins imported from Japan.

“Our museum is a unique place, and we get to teach visitors why this town is special both culturally and environmentally,” said Park Seon-gu, director of Jangsaengpo Whale Museum. 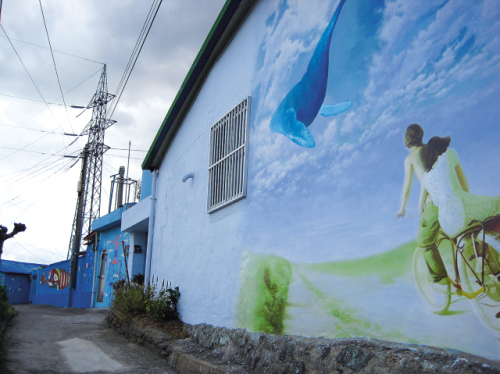 Taehwa River Grand Park is the city’s green lung. Take a stroll or have a relaxing jog through a bamboo forest in the park, one of Ulsan’s 12 scenic areas, where one can relax and let the calmness of nature eliminate all the stress of daily life.

Shinhwa village is located in the southern part of Ulsan. The hillside town, created during 1960s, is now half-empty. But since 2010, the semi-abandoned village has been turned into an open art gallery thanks to support from the Ministry of Culture, Sport and Tourism. Local artists painted the walls of houses with famous paintings such as Van Gogh’s “Sunflower.”

Though it is illegal to capture whales in Korea, those that are caught in nets or killed accidently are allowed to be sold in the market. If you want to get a plate of whale meat, Ulsan is the best place to go.

Although whale meat is not a traditional food in Korea, it has gained some popularity in recent years for its “reputed” health benefits, and there are more than a hundred restaurants serving the rare dish in Ulsan.

Whale meat is usually served in 12 different dishes. Colors and tastes vary depending on the part of whale used. Whale meat sashimi at first tastes like tuna, but if you chew thoroughly it tastes more like beef.

For more information about Ulsan Whale Festival, visit www.ulsanwhale.com or call at (052) 226-2994. To check a whale-watching cruise, also visit www.ulsancitytour.com.