Some are able to express themselves through clothing while others simply find their dresses a uniform or a shelter, said Alberto Scaccioni, chief executive officer of Ente Moda Italia.

“I think that the real challenge for us who work in the fashion system is to spread the virus of searching, finding your own identity and expressing yourself in garments, not only adapting uniforms,” Scaccioni told The Korea Herald on Tuesday.

Scaccioni who also heads CFMI (Centro di Firenze per la Moda), a non-profit association for promoting and globalizing the Italian fashion system, is a big fashion figure in Italy. CFMI has been running Pitti Uomo, the world’s biggest menswear fair, since 1972.

For fashion-savvy men all over the world, though, Scaccioni may be better known as a fashionista frequently found in photos taken by street fashion photographers like the Satorialist.

The Italian man definitely stood out among the black-uniformed Korean men in Seoul. He was decked in a dark blue suit, a red checkered tie and a goldish bracelet he found at a Korean boutique. The way he wore his shoes was especially eye-catching; he circled the long end of the red shoelaces around the ankles of his dark brown shoes. He likes the color contrast, he said. 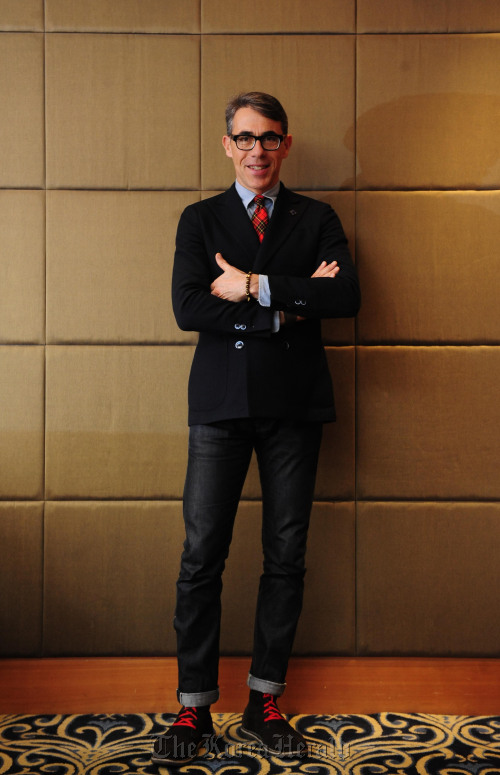 Alberto Scaccioni poses ahead of an interview in Seoul. (Park Hae-mook/The Korea Herald)
“What is important in developing your own style is that it should not be related only with garments but to all your existence, such as behavior, food, relationships with people, and education,” said Scaccioni.

“For example, the way I dress has a strong relation with the book I am reading and the music I am listening to. So building my wardrobe to me is like building my library. I try to create and buy something that will stay with me for ever.”

He visited Korea to take a better look at the Korean fashion market and to “make a test.”

Together with Korea’s fashion agency People of Tastes, EMI will bring in about 20 small and medium-sized Italian brands to showcase in front of Korean buyers in July. The company has already commenced similar projects in Russia, Brazil, U.S., northern European countries and Japan.

“Korea is very hot in Italy. Its businesses in electronics and cars are performing very well, and now we are beginning to talk about Korean fashion. Korea has been paying good attention to the Italian fashion market. For example, at Pitti Uomo, we are seeing a growing number of Korean buyers,” he said.

A mix of menswear, womenswear and accessories brands will be introduced in Seoul ― it is important to bring several categories and see what would work, according to Scaccioni.

The special thing about Italian fashion, he said, is the long history of cultural mix.

“Since centuries ago, everyone was passing by the country and leaving something there. It could be a mess in some cases, but for fashion it worked. I think that is what people today like about Italy; that we have a peculiar identity.

As for some quick advice to Korean men on summer styling, he suggested wearing tough fabrics and long sleeve shirts. Linen is always a best friend, he said, and added that a good pair of shoes would be nice, light ones that are not in leather.

But he shook his head at the mention of short sleeved shirts which many Korean men seem to favor in the hot weather.