The Ministry of Culture, Sports and Tourism on Tuesday launched an advisory committee of 19 leading figures in the country’s cultural scene to discuss ways for Korea to keep hallyu going and also to introduce the lesser-promoted cultural sectors to the world.

The advisory committee will hold monthly meetings to share ideas on developing high-quality and consistent cultural products, revising the legal framework and providing financial support for the traditional culture and fine arts.

“If K-drama and K-pop have opened the door for us to introduce Korean culture around the world, now we need to develop concrete ideas on how to consistently promote hallyu so that we can present other cultural assets like Pororo, food, traditional arts, fashion, tourism and others in the future,” Culture Minister Choe Kwang-shik said during the inaugural meeting of the advisory committee held at Samcheonggak in Seoul. 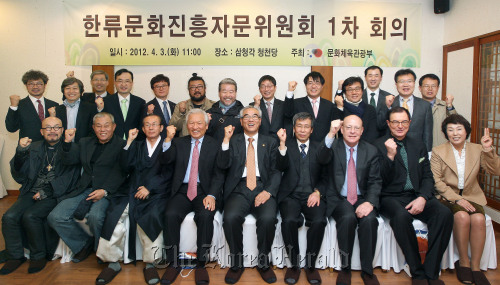 The members selected Kim Seong-kon, director of Korea Literature Translation Institute and also a renowned English literature scholar, as the head of the committee.

At the first round of meeting, Choi Joon-ho, a Korean National University of Arts professor and former director of Korean Cultural Center in Paris, urged the government to promote cultural exchanges with countries where Korean pop culture is making inroads, pointing out that an anti-hallyu movement rising in some parts of the world.

The committee was launched at a critical time when the popularity of Korean pop music is sweeping across Asia, Europe and Latin America.

The world-wide attention on K-pop has presented Korea with new possibilities following the first example of hallyu in the early 2000s, when TV dramas such as “Winter Sonata,” created fans across Asia.

The popularity of K-pop has sparked widespread interest in many aspects of Korean culture with the number of foreign tourists increasing sharply.

Since early this year, the Culture Ministry has been pushing Korean traditional culture as the new driving force for the Korean Wave.

In January, it announced plans to further promote Korean traditional culture and also inaugurated the K-Culture Promotion Taskforce which will coordinate the implementation of the plans. It said it will spend 33.5 billion won this year toward the goal and prepare a budget of 230 billion won for 2014 and 2015 in cooperation with other governmental organizations.

Officials say the ministry will announce a follow-up plan on commercializing hallyu products later this month.