[ The Korea Herald – Send E-mail ]
Celebrities campaign for candidates
By Korea Herald
Published : Apr 3, 2012 - 21:22
Updated : Apr 4, 2012 - 01:06
With the crucial parliamentary elections just a week away amid the elevating electoral mood, various celebrities busied themselves supporting party candidates, either out of political beliefs or based on personal relationships.

Among them, the most prominent is Cho, who also took up the post as chairman of the party’s regional election committee in Busan.

The criminal law professor has long been recognized for his active comments on current affairs and progressive stance. His bass tone and good looks, together with his position as SNU law professor, also boost his publicity.

Cho on Monday toured major universities in Busan and South Gyeongsang Province to urge students to participate in the vote and to support the left-wing runners in their corresponding districts.

In Saha-A, he was joined by Moon Jae-in, the party’s ace candidate in the neighboring Sasang constituency and also a major presidential potential.

“You may vote for the Saenuri Party, if you believe that it has accomplished a lot during its 20-year monopoly,” he said.

“If not, however, you should vote for change.”

However, some observers, especially those in the right-wing camp, blamed Cho for intervening in political affairs and neglecting his duties as a national university professor.

Some candidates relied on their personal family connections with celebrities.

Rep. Moon Hee-sang, a fourth-term DUP lawmaker in Uijeongbu, is often accompanied by former Miss Korea and actress Honey Lee, who is also his niece.

Rep. Kim Boo-kyum, who faces a hard challenge in pro-Saenuri Daegu, was supported by his daughter Kim Ji-su, who recently made her television debut as actress under the stage name Yoon Se-in.

Within the party, former MBC news anchor Rep. Park Young-sun is the most popular back-up member, due to her logical speeches and reputation as a policy expert.

“Lee appeals not only to voters in their 20s and 30s but also to elderly female citizens, who appreciate his intellectual image as a young Harvard graduate,” said a party official.

The 27-year-old member especially drew the public’s attention when he met with Son Su-jo, another 27-year-old, who was nominated in Busan’s Sasang constituency as a matching rival to DUP big shot Moon Jae-in. 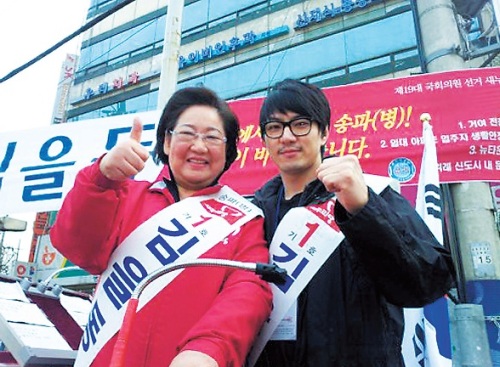 Song Il-guk and Rep. Kim Eul-dong of the ruling Saenuri Party (Kim Eul-dong campaign)
Rep. Kim Eul-dong, the Saenuri runner in Seoul’s Songpa-C, enjoyed the full support of her son and famous actor Song Il-guk, who was frequently witness in her street campaigns and speeches.

Actress Lee Young-ae, too, recently showed herself in Jung-gu to visit candidate Chung Jin-suk, who is known to be intimate with her husband Jeong Ho-young.

On the other hand, some made sour comments over their opponent’s star-dependent campaigns.

“The key point is to gain the trust and support of the voters, not to rely on the fancy back-up speeches of star figures,” said Rep. Son Beom-gyu, a Saenuri lawmaker in Deokyang-A, Goyang.

His words targeted at his rival Sim Sang-jeong, one of the joint leaders of the minority Unified Progressive Party.

Sim earlier announced the list of her supporters, including professor Cho, as well as Kim Eo-jun and Ju Jin-woo, the co-hosts of the popular anti-government podcast “Naneun Ggomsuda.”