The website (www.sejonghakdang.org) operated by the state-run The King Sejong Institute is now available in eight different languages, from the previous six languages, including Russian and Indonesian. The institute named after King Sejong of the Joseon Dynasty (1392-1910), who invented Hangeul, the Korean writing system, has been providing Korean language education programs online in six languages, including Chinese, English and Vietnamese.

“By expanding online services, we expect to see more people in other parts of the world getting the chance to learn both the Korean language and culture,” an official at the ministry said.

The improved website offers interactive and customized contents in order to help learners communicate with Korean instructors in real time. It will also begin to operate archives containing a wide range of multimedia contents and information on Korean language and culture. 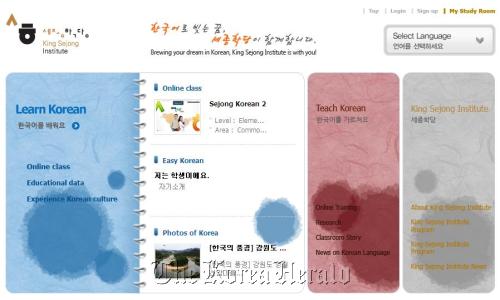 A screen capture of King Sejong Institute’s website, which provides English content on learning Korean language and culture
“Visitors can immediately find multimedia contents by simply entering keywords. They can also store the list of contents they download,” the official said.

Visitors can read the latest news about 75 Korean language institutes currently under operation in 35 countries as well as information on Korean language evaluation tests and new textbooks.

In 2010, the Culture Ministry introduced a package of measures that included improving access to state-run Korean language institutes across the world. The ministry plans to raise the quality of Korean language teachers abroad and introduce a standard curriculum for teaching the language.