Which is why The Grammy Museum’s new exhibition, “Trouble in Paradise: Music and Los Angeles 1945-1975,” has carefully chosen not to overemphasize the group that helped cement L.A.’s reputation as the Land of the Endless Summer, filled with sandy beaches, tricked-out automobiles and beautiful women. Think such songs as Surfin’ USA,” “Little Deuce Coupe” and “California Girls.”

“A lot of people, especially folks not from Los Angeles, might come in thinking, ‘OK, I’ll learn about the Doors and I’m going to learn about the Beach Boys. Which you will,” says Josh Kun, who curated the exhibit running through June 3.

But there’s also a much richer, more diverse and sometimes much darker view of Los Angeles that is reflected in its music during those years, and that is what Kun really set out to show.

“My hope is that people come away with a more nuanced and detailed view of just how much was going on in Los Angeles during those years,” he said. 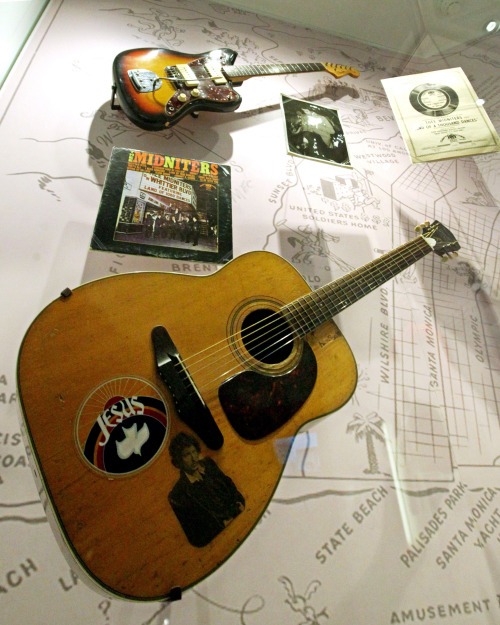 This file photo shows a Harmony Sovereign acoustic guitar with a Jesus sticker among other items from Chicano musician Little Willie G at the exhibit, “Trouble In Paradise: Music and Los Angeles, 1945-1975,” at the Grammy Museum in Los Angeles. (AP-Yonhap News)
In addition to nurturing the Beach Boys, L.A. was the place Sam Cooke came to in 1963 to record his soulful Civil Rights anthem “A Change is Gonna Come” at the famous RCA Building. That same year, Phil Spector was across town at Gold Star Studios building his Wall of Sound with the Ronettes’ song “Be My Baby.”

With a vibrant jazz and R&B scene on the city’s largely black South Side blossoming after World War II, with Chicano-rock fusion developing on the East Side a few years later, and with the likes of musicians from Joni Mitchell to Frank Zappa filling up every nook and cranny of the city’s Laurel Canyon area in the late 1960s, there seemed to be a different style of music taking form every few months.

“Every day, just walking home from school was an adventure for me,” recalls Willie Garcia, who grew up on the South Side, where he would see everyone from Cab Calloway to Count Basie arriving in his neighborhood for a show.

A few years later, Garcia would be doing shows himself, over on the East Side, where he would gain fame as Little Willie G, front man for the group Thee Midniters.