[ The Korea Herald – Send E-mail ]
Titanic’s legacy: A fascination with disasters
By Korea Herald
Published : Apr 1, 2012 - 20:29
Updated : Apr 1, 2012 - 20:29
Epic disasters ― the anguished cries, the stories of heroism ― are the central narratives of our age, both enthralling and horrifying. And our obsession began a century ago, unfolding in just 160 terrifying minutes, on a supposedly unsinkable ship, as more than 1,500 souls slipped into the icy waters of the North Atlantic. And the band played on.

It was the Titanic. And ever since, we’ve been hooked on disasters, in general ― but the tale of the great luxury liner, in particular. And the approaching 100th anniversary of the sinking has merely magnified the Titanic’s fascination.

There were catastrophes before that fateful Sunday night in April 1912, but nothing quite captivated the newly wireless-connected globe’s attention. It was more than news. It was a macabre form of entertainment.

Bigger, deadlier disasters followed, but they all borrowed from the storylines ― morality plays, really ― established by the Titanic’s sinking: The high-profile investigations ... wall-to-wall news coverage ... issues of blame, technological hubris, ignored warnings and economic fairness ― all were themes that played out in the BP oil spill, the space shuttle disasters, Hurricane Katrina, the Exxon Valdez and the recent grounding of the Costa Concordia.

“The story is ageless, like all great stories,” said James Delgado, director of maritime heritage at the National Oceanic and Atmospheric Administration. “The elements in this case of triumph, tragedy, and hubris, of bravery and cowardice, all wrapped up in one brief moment. That speaks to people.”

And to this day, The Titanic is big business in movies, books, songs, poetry, and museum exhibits hundreds of miles (kilometers) from the nearest ocean. Dozens of tourists have paid tens of thousands of dollars to dive in Russian submersibles to visit the ship’s watery grave and see in the ocean floor “where the Titanic dug in and the ship created this knife-like sharp edge,” Delgado said. 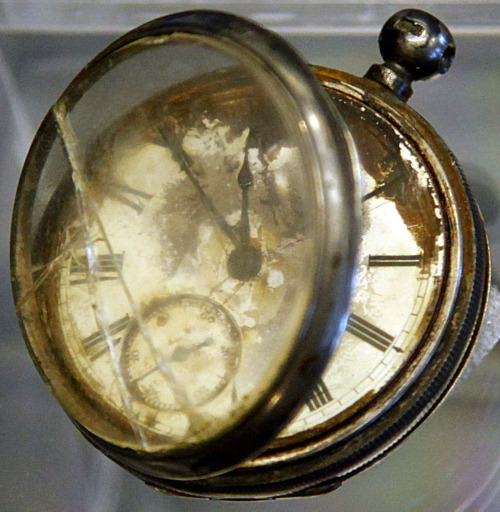 A pocket watch found in the belongings of a third class passenger named William Henry Allen is among a sampling of Titanic artifacts on preview for auction in New York. (AP-Yonhap News)
For decades that burial spot was unknown, but the discovery of the Titanic in 1985 brought Titanic back to the world’s attention. Then a dozen years later, another man raised the Titanic to an even greater fame with a multi-Academy Award winning movie and follow-up documentaries. This was, he said, a parable that the storyteller in him could not ignore.

“It’s this great sort of metaphorical novel that actually happened,” said “Titanic” director James Cameron. “You can go and visit the wreck and go and see this monument to human folly.”

Before the Titanic, the great Chicago fire, the Galveston hurricane and the San Francisco earthquake attracted America’s attention, but “the Titanic hit a nerve in a different way,’’ said Kevin Rozario, a professor of American Studies at Smith College. “It’s the dramatic quality of the Titanic.”

Everything about the sinking ― its speed and the fact that everybody was in one place ― added to the drama.

In fact, the Titanic’s sinking took about as long as a stage play of that era, noted John Wilson Foster, a Queens University Belfast professor who wrote several Titanic books. “The survivors did say during the sinking it seemed like a play,” Foster said.

The public, especially in the past century, has become increasingly fascinated with disasters, especially technological ones. That’s because it helps us cope with increased mechanization, risk and deep-rooted questions about what it means to be human, said Rozario, author of the book “Culture of Calamity.” He said disasters reflect everyday fears that at we often ignore. When a catastrophe happens, “we see ourselves’’ in the storylines that play out.

And with Titanic, the storylines played out instantly thanks to the recent innovation of wireless telegraphy. Even before the Carpathia arrived in New York with survivors, the “story starts to get told in a particular way before there is any substantial information about what happened,’’ said Harvard University professor Steven Biel. “”It’s unprecedented how quickly the story goes around the world.’’

Survivor Lawrence Beesley, in his book “Loss of the SS Titanic” said many press reports made the sinking even more dramatic than it really was.

“I think it is no exaggeration to say that those who read of the disaster quietly at home and pictured to themselves the scene as the Titanic was sinking had more of the sense of horror than those who stood on the deck and watched her go down inch by inch,’’ Beesley concluded in his book. “The fact is that the sense of fear came to the passengers very slowly ― a result of the absence of any signs of danger.”

Beesley and others talked about how no one at the time thought the Titanic was going to go under. At first, they joked that they had to stop for a fresh coat of paint to be applied to where the iceberg scrapped the hull. After all, the Titanic was “unsinkable,” they figured. (AP)