[ The Korea Herald – Send E-mail ]
Rainbow of denim is shading spring style
By Korea Herald
Published : Mar 26, 2012 - 19:27
Updated : Mar 26, 2012 - 19:27
NEW YORK (AP) ― Your attention, please: One of the easiest ways to spruce up your wardrobe this spring is with a splash of color. It doesn’t have to go on your lips or over your shoulder ― and not across your chest, either. This season, the place for bold color is on the bottom.

Colored denim and, by extension, every other kind of pants and trousers in hues as bright as the rainbow are a key look in stores at every end of the shopping spectrum. Part of the pervasiveness is that it’s pretty democratic: You find the shape and silhouette that you like best and find the shade that best complements your skin tone. Swap out blue or khaki and, voila, you’re on trend.

Think of it as you would a fresh coat of paint.

“You can’t deny what’s going on with color,’’ says Daniel Guez, CEO and creative director of the upscale denim label Dylan George. “Everyone can participate in this.’’

Yes, bright yellow bottoms might seem a little intimidating at first, says Tana Ward, American Eagle’s chief merchandising officer, but adds: “We see colored bottoms as easy to wear, believe it or not.’’

Reverse whatever outfit you would have worn before, she suggests: Instead of jeans and a bold pink or red top, put the color on the bottom and pair it with a denim chambray shirt ― maybe even a Western style ― or go for a little femininity with a white lace tank top peeking out the top of a crisp white or blue button-down. You’re also likely to find an easy transition into crocheted or other loose-weave sweaters in natural, neutral colors, too, Ward says. 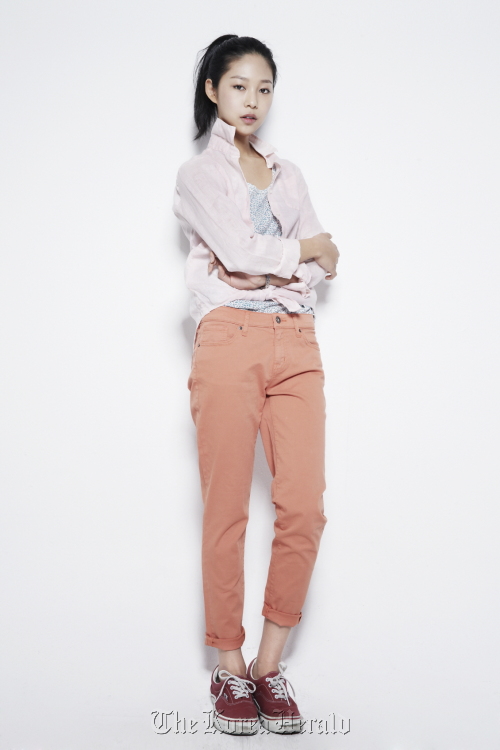 UNIQLO’s colorful denim pants (UNIQLO)
However, she adds, while there are many user-friendly ways to wear colored pants, don’t expect any of them to go unnoticed. Turning a few heads is the point, Ward says, and eventually you’ll gain the confidence to put the bright top with the bright bottom. “Being bold is very modern ... and the most modern way to do this is color on color. Wear the unexpected ― a red bottom, tangerine tank and cobalt blue cardigan.’’

Stylist George Kotsiopoulos says all the color infuses fun into fashion without making women victims of a frivolous trend, but he agrees it’s not for shrinking violets. “I don’t know that you could do too much color ― OK, maybe yellow jeans, a fuchsia top and orange jacket. You can absolutely run the risk of looking like a clown in all of this, but it can also be very chic. You can be a very chic clown.’’

He adds, “This gives you something new to shop for. It’s a way to be casual with a little something extra.’’

(The E! Fashion Police commentator says he bought many colored denim pants for his TV appearances because they look good on camera and in photos. He’s not sure, though, how many other men he’ll bump into on the street wearing them.)

Color is giving a jolt to the jeans business, which only has so many options for growth. Over the past few years, skinny jeans have been the top silhouette and women haven’t been eager to part with them, says Dylan George’s Guez, and then there are the committed fans of other cuts. Once they know what they like, there’s often no urgency to try something new. “I wish I could say that regular denim was blowing out, but I can’t. But what is? Color and patterns ― lace, plaid, floral prints.’’

And, as the weather warms, shoppers will have a chance to buy into this trend all over again in shorts, Guez adds.

Denim can be a “blank canvas’’ that can evolve each season as long as the industry thinks out of the box, says Jeff Lubell, CEO of True Religion. When there’s not enough variety, interest wanes. “I like to do something that is different than the pack. I like a lot of novelty. I believe in color, not necessarily only in denim, but in cargos and khakis.’’

Shoppers are ready, even hungry, for it all, he says.

There certainly has been time to adjust the collective eye since these bright hues have been on the bottoms of models, editors and fashion insiders for a year or so. There was a “fashion moment’’ last September during New York Fashion Week where every top retailer, editor and stylist seemed to get the memo to wear yellow jeans in the front row.

Still, Guez says he would like to see more orange out there, and red gives off the sexiest vibe. Yellow comes off as flirty, he says. Meanwhile, Kate Upton, Sports Illustrated Swimsuit’s cover model this year, will start appearing in his company’s ads in multishade “watercolor’’ jeans.

Pink is one of the most popular pant shades based on sales at American Eagle, Ward reports. She says it complements other hot items of the season, including belts and bracelets in pastel shades.

The one place not to put color if it’s everywhere else is on the feet. A neutral ballet flat or wedge sandal can wisely keep bright bottoms grounded, Ward says.