While Pyongyang’s nuclear program remains central to security issues, the communist state is considered to have significant biological warfare capabilities.

That is according to a Ministry of National Defense white paper that outlines North Korea’s biological capabilities, including synthesizing the smallpox virus. The U.S. regards South Korea as one of the most likely places to see smallpox return.

“Anyone who has the intent and the capability can now create the smallpox virus, which is the most devastating disease we have ever seen. Here the risk (of a smallpox outbreak) is double, in the sense that you have a next door neighbor and you have the international community risk,” Jacob Cohn, of Danish vaccine maker Bavarian Nordic, said. Bavarian Nordic is the only company that produces a non-replicating smallpox vaccine, which was developed in a $750 million project sponsored by the U.S. government.

Estimated to have killed more than 300 million people worldwide during the 20th century, smallpox is one of the most deadly diseases known to man. There is no known cure, and the only way to treat the disease is vaccination within 72 hours of being infected with the virus.

However, the smallpox vaccine is not without flaws. The conventional smallpox vaccine contains the virus that causes the milder cowpox, and works by inducing the immune system to produce antibodies against related viruses.

As such, people with compromised immune systems ― about 20 percent of the population ― cannot be vaccinated with the conventional vaccine. Although a non-replicating vaccine has been developed, South Korea does not have access to it. 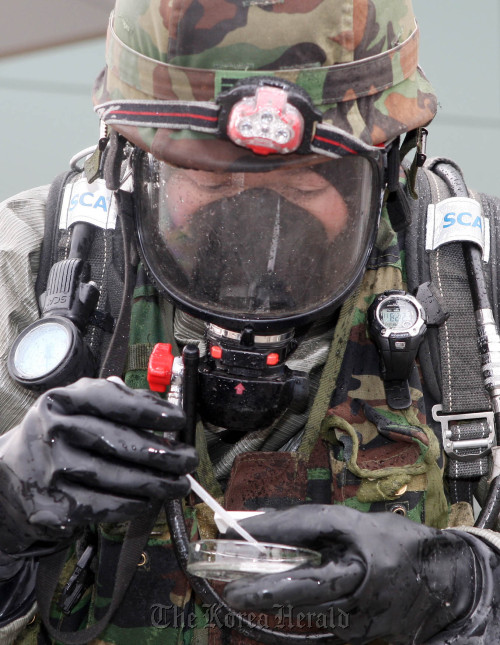 A solider practices testing for biological agents during a recent exercise in Chuncheon, Gangwon Province. (Yonhap News)
“Nuclear is difficult and expensive, smallpox is cheap and not that difficult so that ... in history, all countries that developed nuclear capabilities always had biological capabilities. It costs billions to develop a nuclear program, but it costs less than $1 million to make smallpox,” Cohn said.

“For actors with financial constraints, biological (weapons) is the logical answer.”

In 2001, the U.S. carried out a simulation that showed within two months of a smallpox outbreak, 3 million people would be infected.

With smallpox having had a fatality rate of about 30 percent before it was eradicated, such an incident could leave 1 million people dead.

However, with all immunization programs stopped since the 1980s, some experts project that the fatality rate could be higher.

Despite being considered at high risk of a smallpox recurrence by its main and closest ally, South Korea’s preparations remain far from adequate.

The country began stockpiling smallpox vaccines in 2002, but tests conducted by the Korea Food and Drug Administration last year showed that of the 7 million doses, 1.06 million were unfit for use and destroyed.

Of the remainder, 4.59 million doses had exceeded the recommended duration of storage.

However, the country has no other smallpox vaccine stockpiling project in the works. The Korea Food and Drug Administration is currently testing new batches of locally-produced vaccines, but with the vaccines being of the replicating type, it will not protect about 20 percent of the population.

According to Cohn, while most NATO nations and a number of others including Singapore have engaged the company to discuss Bavarian Nordic’s vaccine, Seoul has shown no interest in the non-replicating vaccine.

The country has not even decided on the scale of the stockpile in relation to the population size. In comparison, the U.S.’ program covers its entire population, while a number of countries including Israel and Singapore have stockpiles that exceed their populations.

In addition, all U.S. Forces Korea personnel are vaccinated against smallpox and the U.S. bases have sufficient vaccines to cover the families of the service members.

The South Korean military has no smallpox vaccination program in place.

Such unpreparedness is not limited to smallpox.

Rep. Shin Hak-yong of the Democratic Unity Party recently pointed out that Seoul’s military only has outdated equipment for detecting biological agents.

According to Shin, the detection equipment used by the military introduced in 2002, and can only detect four types of biological agents.

Although the military is developing equipment with higher sensitivity and range, it is expected to be deployed next year at the earliest.

“As the Korean military’s bio-chemical defense capabilities have been focused on chemical warfare, preparations for biological warfare have been neglected,” Shin said.