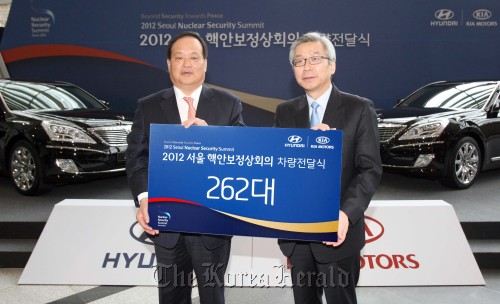 The two companies delivered 262 vehicles, produced for protocol and guard of the global leaders, to the preparation committee for the summit on Monday.

The vehicles included the Equus limousine by Hyundai Motor and the Starex van from Kia Motors, which will be used for the figures from more than 50 countries.

The automakers will also run a maintenance team of 70 experts for checkups and repair of the cars.

The automotive group provided the official vehicles for the Group of 20 summit meeting held in the capital city in 2010.

Meanwhile, BMW Group Korea said it has provided the first ladies (or husbands of female leaders) and ministers with 109 vehicles, including the BMW 7 series limousine and the Gran Turismo sedan.