The main opposition Democratic United Party continues to feud over its nomination processes with just weeks left until candidate registration for the April general elections.

The party was recently shaken by suspicions that its members attempted to collect voters inappropriately to cast ballots by smartphone in the nomination primaries.

This struck a heavy blow to the left-wing party as it pushed ahead with what it calls with pride a mobile voting system, despite the Saenuri Party’s opposition.

The mobile voting scandal was also aggravated by the claims that former Democratic Party members were deliberately excluded from nomination to give way to pro-Roh Moo-hyun figures.

On Sunday, a former civil servant killed himself by jumping off a five-story building in Gwangju, while undergoing the election watchdog’s investigation into his illicit campaigns for Rep. Park Joo-sun, a second-term lawmaker who hailed from the DP, in a constituency of the DUP stronghold city.

The party immediately terminated all nomination screening in the area and kicked off a fact-finding commission, but nevertheless faced vicious blame, both from rivaling parties and from the public. 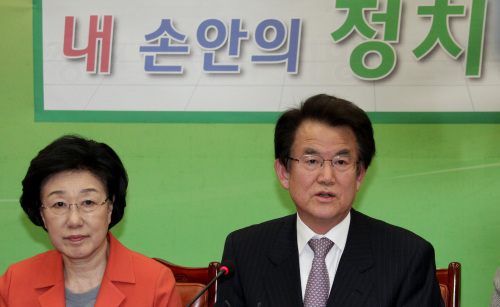 Kang Chul-kyu (right), chairperson of the main opposition Democratic United Party’s nomination screening committee with the party chairwoman Han Myeong-sook. (Yonhap News)
“The mobile voting system, which the DUP claimed to be innovative and democratic, turned out to be an artifice to deceive the voters,” said the vice spokesperson of the ruling Saenuri Party.

The DUP leadership also expressed concerns over the scandal, but chairperson Han Myeong-sook pledged to maintain the mobile voting system.

While the prosecution worked on the Gwangju suicide case, the party fell into further turmoil as some former DP members objected strongly to the initial round of nominations.

Some other members are even considering breaking away from the party and establishing a pro-DP group before the April elections, according to officials.

“The party leadership should remember that the nomination reform campaign was launched for the people, not for the interest of individual candidates,” Kang told reporters Thursday.

“The committee shall resume its duties, once the party clarifies its direction and once again promises to abide by it.”

Han agreed to embrace the committee’s requests, but further delays are yet expected in the party’s candidate nomination, which was originally scheduled to be wrapped up early next week.