KUALA LUMPUR ― “Dream High,” a Korean musical drama co-produced and distributed by KBS was nominated on Tuesday in the youth category of Rose d’Or, a global television festival in Switzerland.

The Korean drama was the only Asian program out of 36 nominated for one of 12 different categories at the festival in Lucerne, which runs from May 7-10.

The drama that portrays the passion and agony of teens dreaming about becoming stars will compete in the festival against BBC’s “Leonardo, Wing and a Prayer,” and “You’re Not a Werewolf” by West German Broadcasting.

The BBC show is an action-packed mystery and drama series about a teenage Leonardo da Vinci, while the German program follows a problem-solving Wolfman who gives advice to struggling teens. More than 400 programs from around the world were submitted for nominations.

“Recently, Korean dramas as well as K-pop are getting popular not only in Asia but also in Europe and the Americas. I think the jury gave higher marks because the program effectively combined the two power factors,” Cho Dae-hyun, president of KBS Media, told The Korea Herald at the Nominees Night in Kuala Lumpur. 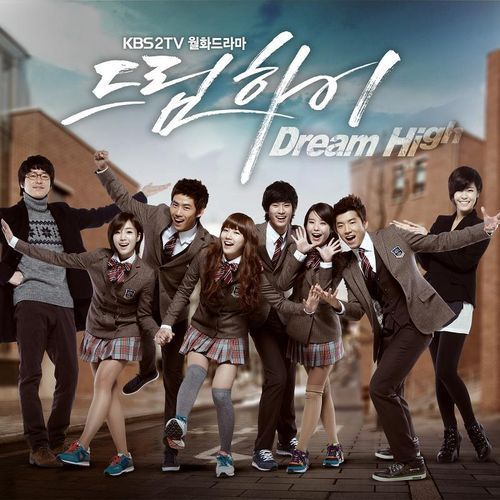 Cast of “Dream High” (KBS)
KBS programs have been nominated for the Golden Rose Awards since 2006. In 2010, two programs by KBS ― “My Too Perfect Sons” and “The Golden Bell Challenge” ― were nominated. However, none have ever won a prize.

Cho said this year will be different because of the growing interest in K-pop all over the world, as well as the quality and creativity of South Korean dramas, which have matured over the years.

“The Korean entertainment industry is the one of the most competitive markets in the world. We train actors and singers for many years to create quality dramas as well as entertainment programs. And also we collaborate with world-renowned experts,” Cho said.

“I know the Rose d’Or festival is putting more focus on programs from Europe and the Americas and hopefully it also will be the place where more Asian works can be introduced,” he added.

The drama features K-pop stars including Taecyeon and Wooyoung from boyband 2PM, Ham Eun-jeong from girl group T-ara and singer IU. It was also partly produced by Park Jin-young, singer and producer for JYP Entertainment.

“Dream High,” gained a viewers’ rating of over 20 percent in Korea, and was exported to more than 20 countries in Asia and in Europe, said Cho of KBS Media, a KBS affiliate in charge of both domestic and overseas sales of the broadcaster’s content.

The drama drew attention from many Asian TV producers and managers who attended the Rose d’Or’s Nominees Night event in Kuala Lumpur, its first official event in Asia. The Swiss-based festival aims to bring more Asian programs to its annual event.

“The answer is simple: Asia’s television market is the second largest in the world and it is growing fast,” said Marc Walder, CEO of Ringier Switzerland and Germany. Ringier Switzerland is the largest media company in the country and the parent company of the Rose d’Or.

Founded in 1961 in Montreux, the Rose d’Or Festival is now held in Lucerne, Switzerland, and is one of the world’s most prestigious entertainment television festivals. It has become a platform and a marketplace for TV professionals, producers, managers of private and public TV stations and production companies from all over the world.

An international jury of 50 experts selects three nominees in each category. The winners in the 12 categories ― including comedy, sitcom, game show, live event show and TV movie ― and the Best of 2012 will be selected by a final, 10-member jury.