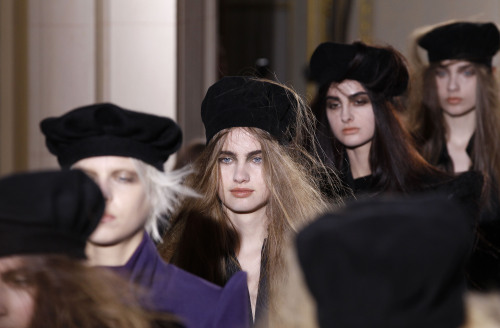 Paris fashion week is rarely known for understatement, as confirmed by Portuguese designer Fatima Lopes who opened the fall-winter 2012 season with a proverbial bang at the iconic war museum Invalides that houses canons and artillery.

When the fashionistas finally managed to unstick themselves from wandering tourists, the message of the Lopes show rang out loud and clear: female flesh is the real source of fire-power, with the offering of sensual, if slightly busy, sheath ensembles. The short first day of the nine-day Paris fashion race is reserved for up-and-coming talent. Because of its hit-or-miss reputation, Tuesday is avoided by many fashion editors.

However rising star Julien David, who delved playfully into men’s clothing, proves that the day does deserve the limelight. His boyish knitwear looks and dark rusings about the Yeti monster provided one of the day’s best shows, and with a touch of irony: all too rare in Paris.

Italian designer Corrado de Biase also produced a fine show mixing up feminine silhouettes with men’s wear _ quickly becoming a strong trend this fall. Metallic touches, too, ticked the in-vogue box, having featured prominently on catwalks in Milan and New York. A man of contradictions, Biase said his show mixed references to Coco Chanel with touches of the 1970’s.

Wednesday _ the first full day on the calendar _ will see the week move into top gear with shows including Dries Van Noten, Mugler and London’s enfant terrible Gareth Pugh.

“The tomboy is back,’’ read the program notes at Corrado de Biase’s Paris fall-winter show that served up floaty silhouettes with a twist of men’s wear.

It was an accomplished affair considering it’s only the third ready-to-wear offering from the designer, with Barbour raincoats successfully fused on top of sheer 1920’s underskirts.

Petrol green added futuristic shimmer to quilted capes and jackets, crossing eras in style and time, while 3-D floral brocades on several short coats and pencil skirts were given an aggressive edge in metallic silver.

A lot this fall has been about men’s wear on women, and here this was on full display. Classical tailoring appeared in boyish collars and lapels on nylon shirtdresses in sheer black, but the exposed breasts punched spectators with the clear androgyny.

For the designer’s inspiration, look no further than the biggest tomboy of her day: Mademoiselle Chanel.

“I love the garcon look of the twenties,’’ said Biase backstage, “how Coco gave bourgeois women a men’s look while staying light in spirit.’’

For the fashion crowd it was a good thing the spirits were light: the cramped venue and lighting glitches might have dampened the mood had the collection not been so strong. 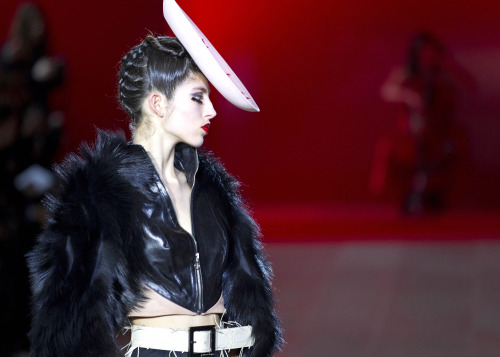 A model wears a creation from designer Fatima Lopes as part of the Fall-Winter, ready-to-wear 2013 fashion collection during Paris Fashion week. (AP)

The Portuguese designer channeled human morphology with bloody dress inserts, shredded leather sleeves and prints of the venous system in the iconic monument that was built for generals wounded in French imperial wars.

Bucking the current trend for padding, the Lopes woman in geometric sheaths had narrow shoulders a look that would have accentuated the frailty of the tiny-boned models had it not been for the provocative leathers in patent black and nude.

Sexy was the overriding mood, with bias-cut sheaths split revealingly up the leg and exposing the shoulders. In another sensual but slightly busy look, a plunging decollete and voluminous brown fox fur sleeves contrasted with tight patent leather lapels and a second-skin micro skirt.

When the show ended, the crowd departed sheepishly through the courtyard, with 40 huge canons pointing straight at them.

There was a trendy insouciance to many of the looks (you can see he’s lived in Tokyo): a double face knitted skirt suit in light gray wool was complemented with a sporty sweatband and snowboots. This was one of many looks that might have come with a warning: “It’s just fashion. Don’t dress like this if it snows!’’

Flashes of chainmail and metallic silk quilting on pouffy dresses added a cooler, aggressive edge to the first wave of overly warm-looking clothes.

But soon enough David was back to the show theme in the mountains, this time facing a childhood fear: the Abominable Snowman. Suffocating Yeti wool blouses, skirts, short pants and snowboots filed out as if the designer was preparing for a bleak winter.

When the revellers noisily applauded for the designer to take his bow, there was no reply and he was nowhere to be seen. (AP)