[ The Korea Herald – Send E-mail ]
New Nike shoe with outer space theme causes frenzy
By Korea Herald
Published : Feb 27, 2012 - 13:21
Updated : Feb 27, 2012 - 18:05
Sneaker fanatics who lined up outside stores overnight got their first crack Friday at a new outer-space themed Nike basketball shoe, getting so unruly in some cities that police were called to restore order.

More than 100 deputies in riot gear quelled a crowd in Orlando, Florida, where the release of the $220 Foamposite Galaxy coincides with this weekend’s NBA All-Star Game. At a mall in Maryland, one person was arrested for disorderly conduct.

The shoes, part of a space-themed collection, are a draw for so-called “sneakerheads” who collect signature sports footgear and can resell it online at a marked-up price, sometimes for hundreds more than retail.

Malls in Florida, New York and Maryland reported bringing in police to manage fans clamoring for the purple and blue shoes, which have star-like flecks of white. Some shoppers lucky enough to get their hands on a pair immediately posted them for sale on eBay at skyrocketing prices: $1,000 and up. 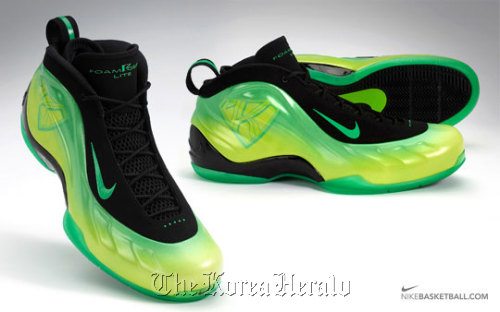 Nike Foamposite (Nike Basketball)
Authorities did have some warning the shoe could cause mayhem. Earlier this month, police were called to a mall outside Albany after pushing and shoving broke out during a promotional event for the shoe.

Orlando resident Gaby Llanos was in the crowd waiting to buy two pairs of the shoes when the rush started outside Florida Mall.

“It was complete havoc,” said Llanos, 23. “People were running and hiding in trees so the police wouldn’t find them.”

Nike spokesman Matthew Kneller said the Nike store in New York City immediately sold out Friday. The shoes were also quickly out of stock in Cambridge, Massachusetts, where people began lining up outside a House of Hoops by Foot Locker at 3 p.m. Thursday. The store only had 12 pairs of the shoes, however, so it handed out tickets to the first dozen people in line, and only those people waited, store manager Terrio Lakes said.

The shoes ― which are being sold at Nike stores and select Foot Lockers, House of Hoops and Foot Action stores ― are part of the Nike’s Foamposite line which originally debuted in 1998. Their outer space theme is a nod to Florida, the host state for the All-Star game, and the longtime launching pad for the nation’s space program.

Nike has relied for years on its limited edition sneakers to generate a lot of buzz with minimal advertising.

During the past holiday season, Poser noted similar fights and incidents of vandalism broke out across the country over a retro model of Air Jordan sneakers. And he said the most recent violence likely won’t hurt Nike’s image.

“Some press is better than no press,” he said.

Sneakerheads collect anything from Air Jordans to shoes created for modern-day basketball stars. They post videos online to show off their shoes.

“We talk sneakers like you would talk sports,” says Jesus Estrella, a website developer in suburban Chicago who has a site about “sneaker culture” that also advises readers how to avoid counterfeit shoes. (AP)