[ The Korea Herald – Send E-mail ]
Jil Sander seduces, Bottega Veneta disarms in Milan
By Korea Herald
Published : Feb 26, 2012 - 20:06
Updated : Feb 26, 2012 - 20:06
MILAN (AFP) ― Femme fatales straight out of a Hitchcock film stalked down the Bottega Veneta catwalk at Milan Fashion Week on Saturday, but they could not compete with the seductive pureness at the Jil Sander show.

Designer Tomas Maier’s collection for Bottega Veneta indulged in darkness, with tailored coats, jackets and dresses with narrow squared shoulders and skinny sleeves, sinched in at the waist with ruffles enhancing the hips.

A grey stretch-dress, embellished with orange and red autumn leaves, was one of the few coloured pieces. There was also little skin on show, apart from a black evening gown with revealing cut-out patterns along the hips and breast.

The notes with the collection described the look as “disarming allure” and, paired with black lipstick and long leather gloves, the outfits certainly seemed designed for women who disarmed their victims with wilful pleasure.

“We took a very direct approach to the body this season,” Maier said.

“The look is covered up and the materials are virtually impenetrable, yet the effect is powerfully physical,” he said. 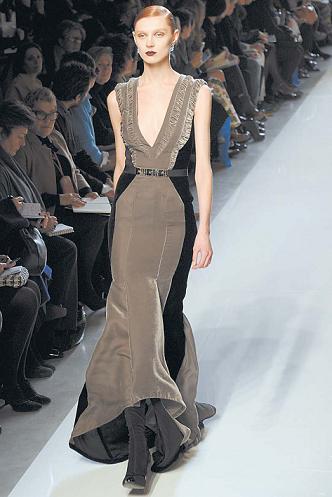 4A model displays a creation as part of Bottega Veneta autumn/winter collection on Saturday during the women’s fashion week in Milan. (AFP-Yonhap News)
Over at Jil Sander, the catwalk was decorated with large vases of rose-coloured flowers, setting off a delicately tailored collection of dresses and coats in luxurious pale blues, pale pink blushes, creams and ivories.

It was designer Raf Simons’ last show for the brand and he received a standing ovation for his latest creations, which oozed a sensuality markedly different from the dark fantasies dominating other leading labels this week.

Soft cape-like coats put a modern spin on 1950s cuts, almost evoking Japanese Kimonos as they delicately enveloped skirts and tops cut along clean lines which captured the understated luxury the label is famed for.

Ivory bustiers topped skirts and sculpted dresses which perfectly echoed the female form, and satin slips in pink and silver were worn with pointed heels and topped with the capes or a simple one-buttoned cream suit jacket.

In stark contrast to many other shows such as Prada, the models wore no jewellery and hardly any make-up, as if both would have spoilt their innocence.

Roses were dominant in the Emporio Armani show later in the day as well, but to a very different end.