Just ask Todd Carmichael and Jean-Philippe Iberti, who spent more than a year perfecting a blend to suit the palate of the Hollywood star.

The founding partners of La Colombe, a Philadelphia-based roastery with cafes here and in New York and Chicago, paid repeated visits to DiCaprio’s West Hollywood abode to brew him single-batch roasts and to test blends, working to come up with a new La Colombe label that would bear DiCaprio’s signature.

That blend is called Lyon. It is sourced from Brazil, Ethiopia, Haiti, and Peru. It is being sold in Whole Foods and Williams-Sonoma stores, and, of course, in La Colombe cafes and on the La Colombe website. And all of the net profits from the Lyon blend ― 100 percent ― go to the Leonardo DiCaprio Foundation, funding wildlife protection, forest preservation, clean-water projects, disaster relief and climate-change research around the globe.

“Raising awareness on the most pressing environmental issues of our time is more important than ever,” DiCaprio says in a news release issued last week from the star’s camp and the artisanal roasters. “I am thrilled to be a part of this new project with La Colombe that will help aid the shift to a truly sustainable future for the planet and its inhabitants.”

DiCaprio is in Australia shooting “The Great Gatsby,” director Baz Luhrmann’s adaptation of the F. Scott Fitzgerald classic (which, by the way, boasts a character who runs a coffee shop). And when DiCaprio is in moviemaking mode, he does not speak to the press.

So how did DiCaprio and the La Colombe guys meet?

Somewhere on the eco-philosophical borders of Borneo and Sumatra.

“Borneo’s a coffee-growing country, it’s right across from Sumatra, and we buy from both places,” explains Carmichael, who, in addition to being a serious coffee dude is an adventurer who holds the world record for the fastest solo trek across Antarctica to the South Pole (700 miles in 39 days, 7 hours, and 49 minutes).

Carmichael and Iberti have been battling a major coffee producer in Borneo who has been burning off forests, endangering the ecosystem and the species that live there. 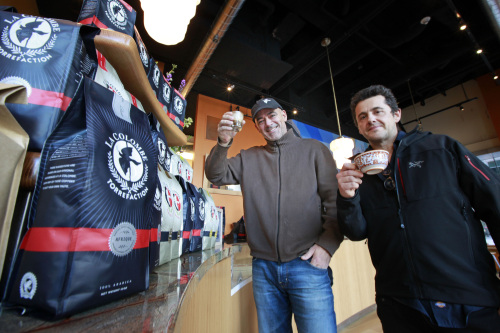 Book of unique accommodationsLa Colombe’s Todd Carmichael, left, and Jean-Philippe Iberti with their wares at 15th and Dilworth Plaza, Feb. 6, in Philadelphia, Pennsylvania. (Philadelphia Inquirer/MCTeye)
And DiCaprio, through his foundation, had been “working his brains off” in Sumatra, says Carmichael, trying to save the endangered Sumatran tiger.

“Eventually our worlds collided,” Carmichael says. “It doesn’t matter who you are. If you’re a coffee roaster, or you’re an A-lister, or you’re a guy just trying to save a tree from falling down, your worlds are going to come together as long as you’re really doing the work.”

The initial meeting of Carmichael, Iberti and DiCaprio was penciled in for five minutes. Nine hours later, they’re still hanging out, smoking cigars, watching the actor’s giant box turtle waddle around. The La Colombers were talking coffee, but Carmichael was also talking about the late actor Paul Newman, whose charitable foodstuffs company, Newman’s Own, Carmichael saw as a model.

“Instead of saying, ‘Can I get your autograph, and let’s talk about how much carbon emissions we have,’ I said, ‘You’re the new Paul Newman,’” he recalls.

So Carmichael launched in on his pitch: a “next-generation Newman,” someone whose concern for the environment, and for people, and for organic, ethical, Earth-conscious food and drink, could be used to fund philanthropic causes.

That was just the start.

Carmichael and Iberti made return trips to casa DiCaprio, holding “long conversations about what we could do, what we could not do, and walking that fine line between endorsement and commercialization,” Iberti says. “The last thing he wants is to see his face in the grocery store.”

(The Lyon packaging is as tasteful as La Colombe’s other bags, embellished with DiCaprio’s crisp signature, and with an extra tag that explains the blend’s origins, complete with a QR code that designates where the funds generated from the coffee’s sales go.)

And so the La Colombe guys made the Hollywood guy some coffee. Lots of coffee.

“We spent the next six months just blowing this guy’s mind with the coffee,” says Carmichael, who did note that DiCaprio showed a marked aversion to beans from Madagascar. Although the La Colombe team never identified what was being blended for him to sample, the star would invariably detect the mineral-y profile of the Madagascar bean.

“I kept trying to squeeze it in there,” says Carmichael, “and it wasn’t happening. Not that he knew it was (from) Madagascar ― because we said we would not mention the countries that we were sourcing ― but he picked it. ... He’d shake his head and go, ‘No, there’s something in there.’ ...

“He’s tough, man. Moviemakers are the most patient people because they know stuff takes five years. If it’s not perfect, they’ll say: ‘Ah, not quite yet.’”

And then, finally, Leo said let’s do this.

“It was a lot of work,” Iberti adds, with a laugh. “When you’re meeting with Leo, and you’re talking, and you’re making coffee, that’s easy. But it’s a year and a half down the line and the coffee is just now coming out.”

Over at SimplyLeonardoDiCaprio.com, the 12-year-old fan site run by Marcie Lucas, news of Leo’s charity coffee is prominently displayed.

“I’m not a coffee drinker,” confesses Lucas, reached by phone the other day. “But everything Leo brings attention to, all the fans are interested in. We all support him. I’m sure the coffee will do well.”