Oh Soo-hyun, a 31-year-old mother in Seoul, never stops looking at her smartphone while breastfeeding her two-month-old son.

“There are many things to buy for a newborn, but I still don’t know what is the best for him. So I keep reading reviews of products recommended by moms on blogs and online cafes,” she said.

From baby facial creams to detergents imported from Europe, North America and Japan, Oh said there are so many products that she has to choose ― and to fulfill her satisfaction that she has done something special for her child.

“I want to buy organic products that are said to be environment-friendly and better for kids. Prices are 3-4 times more expensive than those made in Korea. But I can’t help it,” she said.

She frequently visits two online cafs ― “Momsholic” (cafe.naver.com/imsanbu.cafe) and “Gangnam Mom’s Aromatic Moment” (cafe.naver.com/kangnamamour). Oh calls herself a beginner in the heated competition among moms in search of better products and better ideas. After hours of searching and studying, Oh said she tries to buy the best product at the cheapest price.

Momsholic is one of the most popular online cafs for moms with young children. It currently has over 1.6 million members. Mothers exchange their ideas on literally everything in motherhood. They post reviews on food, clothes, appliances like sterilizers and baby meal cookers, and most importantly, strollers.

Strollers, particularly those imported from Europe, have become a symbol of wealth in Korea. Prices range from 1 million to 6 million won ($900-5,400). But the sales of premium strollers both at on and offline markets are still high, an industry insider said.

“I envy those mothers who push Stokke or Orbit around the apartment complex. Strollers are No.1 on my baby shower list,” said a mother-to-be in Gangnam, who declined to give her name. 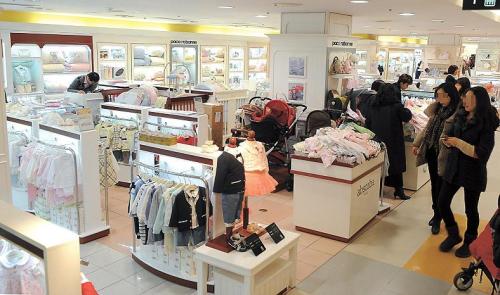 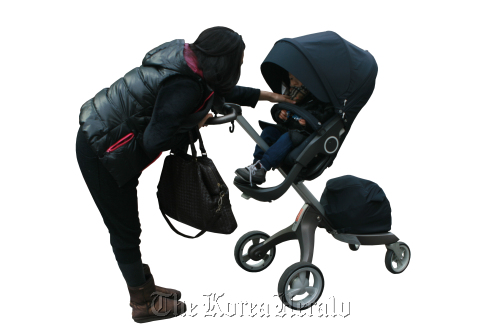 A woman pushes a Stokke stroller. (Cho Chung-un/The Korea Herald)
Stokke strollers ― made in the Netherlands and partly in China ― are famous for their modern design and color and are priced around 1.8 million won. Orbit, a high-end brand of strollers produced by a U.S. company, is also popular after the country’s top star Ko So-young chose one for her baby. They are priced around 2.1 million won.

These are products made for high-income families, but moms even from the mid-income brackets try everything they can to get one. Some make a group purchase of strollers or some look for used ones on online markets.

The country’s fertility rate is stuck at 1.2 per woman, the lowest in the OECD. However, the size of the country’s baby and kid market by revenue has dramatically increased to 27 trillion won in 2011, a 20 percent increase from 2010. Parents are spending more money on their children than before.

Local companies are also jumping into the market, introducing quality baby products ranging from skincare to food. But it will take a while for Korean companies to create something as attractive as Stokke and Orbit for Korea’s highly demanding mothers, they added.

The passion for strollers passes on to education and fashion as babies grow up.

“As my babies grew up, the amount of money I spent on them also increased. It’s difficult for moms who started their motherhood by buying Stokke to suddenly lower the level of spending on kids,” Park Ji-young, a 37-year-old working mom in Seoul, said.

Some mothers even have study groups to figure out the best education method for their kids, Park said. But she doesn’t have the time to join, she added.

The fashion market for babies and kids is also growing fast.

Thanks to parents who want their kids to look fabulous in kindergarten or day care centers, luxury brands such as Burberry and Gucci are expanding their baby line here.

The percentage of imported baby and kid fashion brands increased 37.6 percent in 2011 to 23.5 percent in 2007, according to Lotte Department Store in Sogong-dong, Seoul.

Experts say mothers shouldn’t just believe in what others say but to test them out before purchasing goods by visiting exhibitions on baby goods and services.

A number of large-scale exhibitions on infant and children products are scheduled to take place in Seoul and other major cities in Korea.

BeFe Baby Fair, the most reputable expo on products and services for moms and babies, will take place at COEX, Samseong-dong in Seoul, on March 1-4. More than 150 companies will participate in the event, offering parents a chance to experience various baby products at one place. Visitors can get free tickets for the exhibition at www.befe.co.kr. For more information, call (02) 556-2236.

Similar types of baby fairs will be held across the country in the first half of the year.