Hollywood actress Reese Witherspoon said on Thursday it’s only natural for women to have wrinkles as they age, and she finds it wonderful to be an example of that on screen.

During her first visit to Seoul the 35-year-old actress seemed unaffected when asked by a reporter whether she is “all right” with having visible wrinkles in a scene from her rom-com action film “This Means War.”

“I’ve been making movies since I was 14,”the actress told reporters during the press conference.

“The wonderful part of it is that I can be an example for woman of what it is like to look like 34 in the movie. This is a great responsibility and I take it very seriously because women are very hard on themselves. And I think I’ve been very lucky to have generations of women grow up watching my movies and I want them to feel good about themselves, and realize that you don’t have to change yourself to be lovable or likable. It’s more important to be accomplished, hardworking, funny, interesting, curious ― and those are the women that I find the most appealing.”

In the upcoming movie, Witherspoon plays Lauren, a beautiful and successful product-testing executive who ends up in a love triangle with two CIA agents. The agents, Tuck and FDR ― played by Chris Pine and Tom Hardy ― are in fact best friends at work. But after finding out they’ve been dating the same woman, the duo starts abusing CIA technologies to find out about Lauren’s personal tastes ― to win her heart.

“My character Lauren has to make a choice between Tuck and FDR,” Witherspoon said. “You don’t anticipate what she’s going to decide till the very last minute. I think Chelsea Handler (who plays Witherspoon’s best friend character)’s character has a very good line in the movie where she says, ‘Don’t pick the better man, but pick the man who makes you a better woman.’ That was the perfect key that unlocked the whole movie.”

The Oscar-winning actress also spoke about balancing work and her family. She is currently married to talent agent Jim Toth, and has two children Ava and Deacon from a previous marriage. “Balancing work and family … this is very hard,” the actress said. “And I think many women in the world experience that. I am very lucky that I have a very supportive family. My mother helps me quite a bit. And I only make one movie a year. I try to be very careful with which movie I decide to make, because it takes my time away from my family. So I try to only pick the best scripts and work with the best people.” 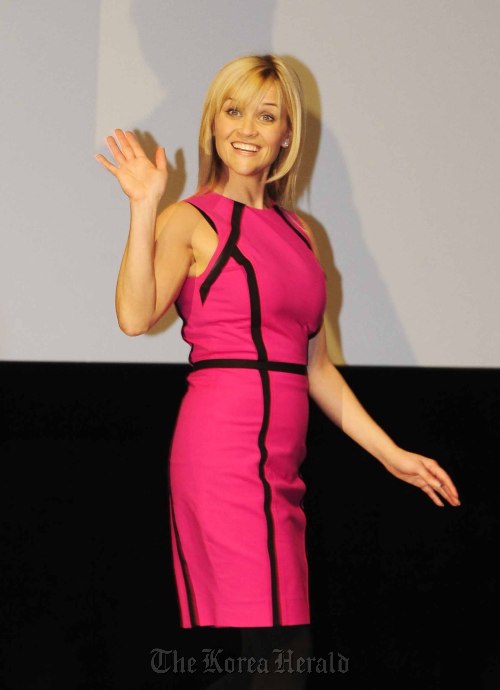 Reese Witherspoon poses for a photo during a press conference promoting “This Means War” in Seoul on Thursday. (Park Hae-mook/The Korea Herald)
Witherspoon, who rose to stardom by playing a blonde fashion major who decides to go to law school at Harvard in her 2001 flick “Legally Blonde” ― which was a huge hit in Korea as well ― has been actively involved with women and children’s advocacy groups, including the Children’s Defense Fund.

“I am so thrilled to hear that I have so many Korean fans, especially women, for my movie ‘Legally Blonde,’” the actress said. “One experience I remember being in Washington, D.C. ― I was giving a speech at a conference of a hundred international women judges talking about different policies to help women throughout the world. And a group of Korean women came up to me and said, ‘I went to law school because of ‘Legally Blonde.’ And sometimes you don’t realize when you are making movies what incredible influence you could make on young women and people out in the world. I consider it such a gift and I want to say thank you to everyone who has seen my movies.”

During the conference, “This Means War” director McG joined Witherspoon. He expressed his attachment to Korean cinema, mentioning late director Kim Ki-young’s 1960 film “The Housemaid” and Kim Ji-woon’s 2003 horror movie “The Tale of Two Sisters” as his favorites.

Following the press conference, Witherspoon and McG were to attend a red carpet event at CGV Yeongdeungpo on Thursday night. The actress and director are scheduled to leave Seoul on Friday.

“This Means War” opens in theaters in Korea on Feb. 29.