“The rights of the individuals to seek compensation still stand. No comfort woman said entrusted their rights to the Korean government and no-one waived these rights,” Park said.

Founded in 2010 by combining the commission supporting the victims of forced labor under Japanese rule, and that for those who were forced into labor abroad during the Pacific War, Park’s commission is charged with uncovering related information and for providing financial support to the victims and their families. Since 2008, the commission has paid out nearly 400 billion won in support.

Regarding financial aide Japan provided during the 1960s, Park said that the argument that the Park Chung-hee administration settled for too little is detrimental to the cause as the loans from Japan were compensation between nations and did not concern the individual victims.

“Such views should be corrected. The government was not acting on behalf of the individual victims. But if we continue to argue that point, the fight is being directed at the Korean government,” Park said. 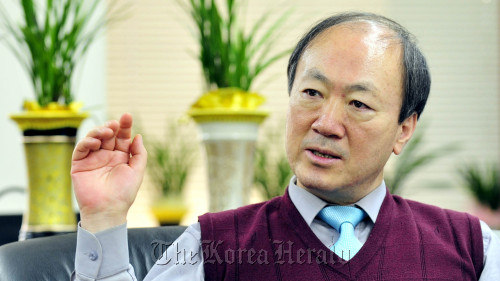 Park In-hwan, the new chief of the Prime Ministerial commission on investigating issues regarding forced labor during Japan’s occupation of Korea, speaks during a recent interview. (Kim Myung-sub/The Korea Herald)
Park, who has been involved in related issues since his college days when he joined the Young Korean Academy founded by the independence fighter Ahn Chang-ho, said that the commission’s works are aimed at Japanese government’s conscience and that efforts need to be made to change Japan’s stance on history.

He also thinks that the commission’s efforts will have wider implications.

“Although it is our government that provides the support, we need to change Japan’s view on history, and to make Japanese firms guilty of war crimes to realize,” Park said.

“And, if we can’t consolidate our position on this, we will one day be driven back by Japan on Dokdo issues.”

Park said that Korea should learn from the case of Germany and the way that country has accounted for the crimes of the Nazis.

“Since the end of the war, Germany has not only compensated nations but individual victims, including non-German nationals,” Park said. He added that German companies such as Volkswagen and Siemens that benefited under the Nazi rule also share the costs.

“In contrast, Japan has limited compensations to the Japanese and even then only to those who belonged to the military, I think this is a frightening remnant of Japan’s militarism.”

With regards to the differences in the way the two nations acted after each lost their wars, Park says that the causes lie in the victims.

“The difference is not that Japan is evil and Germany is conscientious. The difference is in the victims,” Park said, adding that the Jewish set about bringing Germany to account with strong determination. He added that the Jewish people and Israel investigated the cases regarding all of the millions of the victims of the Holocaust and brought the German government to account.

“Even now German leaders apologize (for the crimes of the Nazis), when they visit countries that were affected. That is the power of the Jewish people. In contrast, the most expressive term Japan’s rulers have used is “thoughts of pain and regret” from their emperor. The expression does not even exist in Korean, and there is no mention of their crimes,” Park said.

Citing Anne Frank’s diary and movies such as Schindler’s List, Park said that the Jewish people also created supportive public opinion that enabled them to pin down the Germans.

“We didn’t. We were too concerned with making a living, and did not let the world know about the cruelties inflicted by Japan.

Concerning the commission’s status as a temporary entity, Park said that it should be made a permanent organization at least until its investigations are completed or until the Japanese government admits to past crimes.

“We have only covered about 5 percent of the total. Under such a system, we cannot make long term plans, and closing down because we run out of time is what Japan wants,” Park said. He added that Japanese officials who come in contact with the commission invariably enquire about when the commission will be shut down.

He said that some consider the commission as being similar to those that shed light on past incidents that have led to friction between conservatives and the progressives, but we our target is the Japanese government.

“And for the government out budget of more than 100 billion won each year must be a burden. But if they (lawmakers) know the details, I think they will support making the commission permanent. Until the general elections we will strengthen out argument and afterwards we will work on convincing lawmakers.”