The film, entitled “Pieta,” will star actor Lee Jeong-jin and actress Jo Min-soo. According to NEW, Kim thought of the initial plot of the film as he wanted to delve into the theme of evil, and whether or not “human beings have evilness as one of their innate qualities.”

The upcoming film tells the story of a heartless man whose job is to threaten debtors to pay their money back to his clients. The plot develops as the man, who has no family, one day receives a visit from a strange, middle-aged woman ― who claims she is his long-lost biological mother. 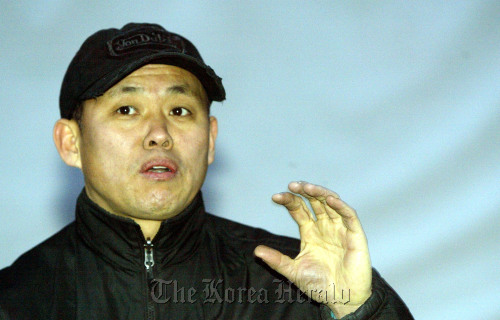 Director Kim Ki-duk (The Korea Herald)
Kim disappeared from the Korean film scene after the release of “Dream” in 2008, claiming that his assistant director Jang Hoon “betrayed” him by signing up with ShowBox, one of the major movie production houses in Korea.

He won a coveted side prize at Cannes last year, for his wrenching cinematic self-portrait “Arirang.” The movie featured his perceived failings as a director after going through many traumatic events and “betrayals” by his colleagues in the film industry.

He also made the film “Amen” in Europe last year, using a single DSLR camera with no crew members except the starring actress, Kim Ye-na. The film premiered at the San Sebastian Film Festival and BIFF last year, but was never released in theaters.

According to NEW, filming of “Pieta” will be completed by next month. No release date has yet been set.