[ The Korea Herald – Send E-mail ]
Celebration of British fashion icons heats up
By Korea Herald
Published : Feb 20, 2012 - 13:41
Updated : Feb 20, 2012 - 18:09
LONDON (AP) ― It must be fashion week: leather jeans, African body paint, androgynous clothes and much more were on display in London Saturday as big names like Vivienne Westwood, Mulberry and Paul Smith made their mark.

Others turned to velvet for a showy, festive look.

Much of the attention focused on Westwood, once England’s high priestess of punk, now a heritage brand unto herself, a designer whose vast experience and detailed archives can be mined whenever it’s time to whip up another collection.

This time it was her Red Label look, which often depends on being able to put a fresh twist of the designs of recent decades.

This time, the twist was body paint (in some cases it looked like temporary tattoos) applied to the models’ skin before they hit the stage. Many had symbols or words painted on their necks, arms or chests before they strutted onto the catwalk; others had their legs painted. 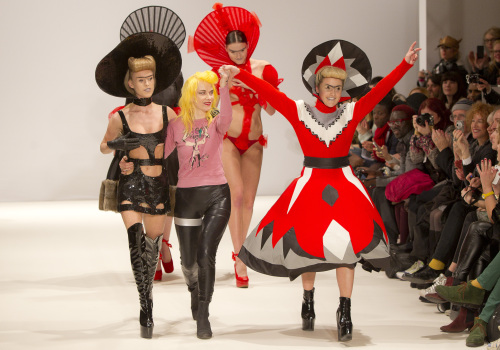 Model and actress Jaime Winstone (right) takes the applause with designer Pam Hogg (center), during London Fashion Week, Sunday. (AP-Yonhap News)
It added aura and mystery to Westwood’s show, which featured some beautifully shaped dresses, most in simple solid colors, as well as some less successful ensembles. It was a playful and picturesque show. Westwood called it a British collection, citing Savile Row tailors and the shirtmakers of Jermyn Street, but it had an international feel, helped by the body paint.

Would the collection, or the chance to be among the first to sample Westwood’s next effort, lure her back to the pressures of a catwalk show?

“Without a doubt,’’ Wood said.

The mood was quite different at the luxury band Mulberry show. Taking inspiration from the monsters in Maurice Sendak’s children’s book “Where the Wild Things Are,’’ Mulberry sent models swathed in oversized, shaggy fur coats and gilets down the catwalk Sunday for its whimsical show.

Creative director Emma Hill said she was inspired both by Sendak’s beloved book and by Spike Jonze’s movie adaptation ― and the playful tone was set with a few roars on the soundtrack as the show began. Some of the cartoon owlish creatures even found their way onto a model’s printed sweater, and at one point the catwalk was invaded by a particularly shaggy dog, dressed in a tiger-striped canine-sized sweater.

“The rustic colors, furry textures and dark woody atmosphere (of the movie) felt like a natural fit for Mulberry, but with a enchanted and childlike twist,’’ Hill told the Associated Press in an email.