[ The Korea Herald – Send E-mail ]
Ralph Fiennes does the Bard modern, military
By Claire Lee
Published : Feb 17, 2012 - 19:52
Updated : Feb 17, 2012 - 19:52
Ralph Fiennes’ “Coriolanus” is not your typical toga-and-sandals Shakespeare. It’s camouflage-and-combat boots Shakespeare, it’s gritty, it’s graffitied. Although the actor and first-time director is faithful to the Bard’s text, setting his tale of usurpation and political upheaval in the city-state of Rome, it looks more like Bosnia, or Beirut.

Slabs of grim modernist architecture, the rubble and debris of poverty and conflict, TV monitors reporting news of rioting and war ― Fiennes’ “Coriolanus,” with its people’s uprisings and its uniformed demagogues, its partisan clashes and elitist arrogance, is about as contemporary as it gets.

“I felt that it should be absolutely set today,” said Fiennes, on the phone from London last week. “I’m sure you could put ‘Coriolanus’ into various historical contexts, because of its themes of nobility and warrior prowess ― they’re ancient.

“But I still feel that those themes are even more relevant today. Certainly, when I read up about the sort of military ethic of places like West Point, things haven’t changed much, really.”

In “Coriolanus,” with a screen adaptation by Oscar-nominated John Logan (for “Hugo”), Fiennes is Caius Martius Coriolanus, a mighty, mightily feared military leader. His mother, Volumnia (an awesome Vanessa Redgrave), is pushing him to seek the position of consul, but the citizens have turned against him. After much sturm und drang, Coriolanus is expelled from Rome, only to ally himself with his enemies ― led by Gerard Butler ― and then return to take revenge.

Fiennes, the English actor of “Schindler’s List,” “The English Patient” and “The Reader” fame ― not to mention the role of one Lord Voldemort in a series of wee little fantasies about a boy wizard ― has been thinking about a screen adaptation of Shakespeare’s last great tragedy since he starred in a London stage production, back in 2000. Throughout the decade, he made his pitches to producers and film finance folk. 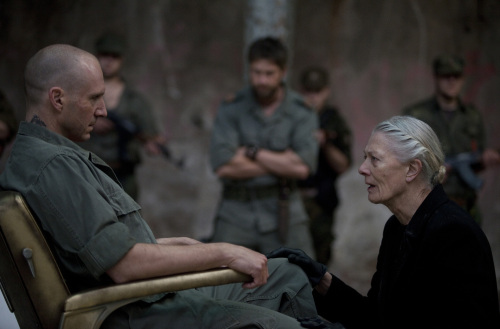 Ralph Fiennes as Caius Martius and Vanessa Redgrave as Volumina in Ralph Fiennes’s film Coriolanus. (The Weinstein Company/MCT)
“It was difficult,” he acknowledges.” ‘Coriolanus’ isn’t that well-known, and people who do know of it often find it a difficult play. Its reputation is that it’s unwieldy, and that the hero is unsympathetic ...

“Actually, I love it, because I think it’s confrontational and dynamic and provocative. It presents the audience with a very high-definition protagonist ― he challenges you to dislike him.”

A difficult play, a disliked hero, no wonder he had trouble getting this thing off the ground.

“And,” he says, laughing, “I’m a first-time director, and I’m an actor saying, ‘You know, I want to make a movie and I’m going to be the star.’ You can feel people sort of clenching in anticipation that it’s a fantasy project.

“But I did a lot of preparatory work, and got a mood reel, a show reel together, and lots of drawings, and luckily I had done some location scouting in Serbia and Eastern Europe. I knew I had to show people that I was doing my homework.”

So, with screenwriter Logan on board, and with a commitment from Redgrave, and with “tenacious and loyal” producers at his side, Fiennes got to make his film. He shot in Serbia and in and around Bucharest, Romania, with Barry Ackroyd (“The Hurt Locker,” “Green Zone”) behind the camera.

Well-received on the festival circuit, with year-end nominations from critics’ groups, Fiennes’ ferocious and visceral “Coriolanus” can already be deemed an artistic success. Whether it becomes a financial success is undetermined, but Fiennes is already looking ahead to a second stint in the director’s chair.

“Right now, I am trying to get another film off the ground,” he says. “It’s the story of Ellen Ternan, who was the young actress who was pursued by Charles Dickens and became his mistress for the last few years of his life.

“It was kept very secret by all concerned, so there hasn’t really been much focus on it as a story.”

“Who would think I’d be on a Dickens jag?” Fiennes says. “But it seems to be panning out that way.”

And Fiennes recently did a top-secret turn in “Skyfall,” the Sam Mendes-directed James Bond film. Daniel Craig is back for his third go-round as 007, Judi Dench is back as MI6 boss M, Javier Bardem is the villain, and Fiennes is ...

“I can’t talk about who and what I’m playing, but apart from that what would you like to know,” he quips.

“It’s a great script by John Logan, so as Bond scripts go it’s pretty smart, pretty intelligent. A lot more character-driven, perhaps, than normal, but it still has all the things Bond fans like, with the chases and the girls and the fights and the gadgets ...

“I have great hopes that it will raise the bar for Bond films.”