[ The Korea Herald – Send E-mail ]
Hitting a fashion show? Crazy heels required
By Korea Herald
Published : Feb 15, 2012 - 13:05
Updated : Feb 15, 2012 - 19:39
NEW YORK (AP) ― It’s a blustery day ― February tends to be that way in New York ― and Marian Kihogo, a fashion stylist and blogger from London, is dashing from one runway show to another, from the tents at Lincoln Center to studios and galleries scattered around Manhattan.

As she strides by on her “architectural heels’’ by Nicholas Kirkwood for Peter Pilotto, the heels hollowed out for artistic effect, this reporter dares to suggest she might be more comfortable in running shoes.

She laughs. “Running shoes! That would be fashion suicide. I think the fashion powers-that-be would stone me!’’

It’s all a little intimidating for the uninitiated, who may find themselves panicking the first time they sit in the front row of a runway show. For us, the command, “Uncross your legs!’’ induces something akin to terror.

That’s what the pack of photographers at the foot of the runway calls out to ensure their camera shots won’t be ruined by a dangling foot. But it’s also the moment that all eyes shift downward. 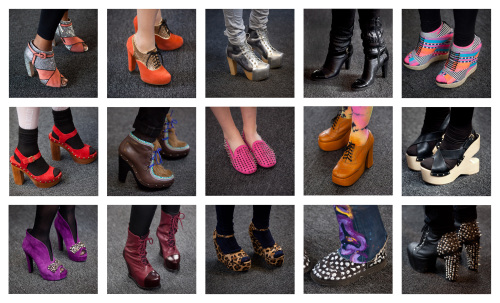 This combination photo shows the shoes worn by guests at Lincoln Center during Fall Fashion Week, in New York. (AP-Yonhap News)
Last year, this reporter witnessed a woman on crutches at a fashion show, the injured foot in an orthopedic boot, the other in a stiletto.

Pekerman thinks she’s found a happy medium ― a pair of Brian Atwood heels in lavender that she bought on sale at Saks Fifth Avenue and swears are comfortable. “I could run for you right now, I really could,’’ she says.

“I’ve seen a lot of crazy shoes here that belong in the circus,’’ Pekerman says. “People are wobbling around. But some girls, they just want to stick out.’’

Pekerman does have one little secret ― foot petals, basically soft pads you sneak into your shoes to provide a little cushioning. But some women, says one fashion insider, have another, darker secret.

“I know from experience that there are plenty of flats tucked away in tote bags,’’ says Ken Downing, fashion director for Neiman Marcus, with a wink. “And sitting in the back seats of sedans.’’ Let’s face it, says Downing, “We all know what a beating Fashion Week can be on the feet.’’

Downing scans the front row of the Cushnie et Ochs runway show, where we’re sitting. There’s barely a flat in sight, though one woman he knows, suffering from a knee injury, has donned a pair of adorable studded sneakers.

But, Downing says, there’s a good reason for all this. After all, the fashionistas who form most of the audience at runway shows ― buyers, stylists, major clients and of course celebrities ― have rather a duty to, well, take one for the team. (Easy for him to say.)

“Listen,’’ Downing says, “footwear is a true indicator of style, and where fashion is, and where it’s going. We’re an industry of image. So it’s important that we do our part.’’

On a frigid Sunday morning, on line outside the Catherine Malandrino show with the wind whipping off the Hudson River, is a woman who’s definitely NOT faking the accessories.

Laetitia Chaix is wearing seriously chic Chanel fur boots. They would not be out of place at the South Pole. “I call them my grizzly boots,’’ she says. “They were perfect for today. I don’t get to wear them too much, because they are so hot.’’

In fact, muses Chaix, the boots are so hot, “one could wear them today with only a little bathing suit.’’

Now, THAT’S going for it.