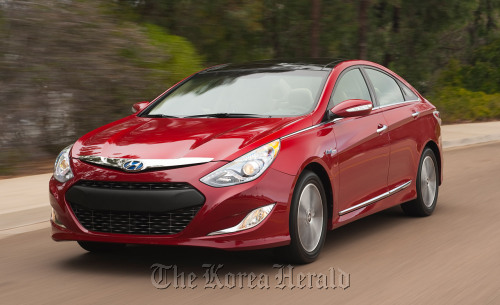 Hyundai Motor and Toyota Motor have launched a keen competition to dominate the emerging hybrid car market in Korea this year.

Though the ratio of hybrids out of the total cars sold by Korean companies stayed at 1.3 percent last year, and 3.7 percent of import brands, they recently vitalized the eco-friendly car marketing and sales.

The Prius models are aimed at mass production of the hybrid cars.

The models are powered by 1.8-liter engines with the high fuel efficiency of 29.2 kilometers per liter, which is backed by the Toyota Hybrid System.

While the issue is the price tag, the company said it would unveil the prices on Feb. 21.

The New Camry Hybrid is cheaper by 3 million won ($2,630) than its earlier model. And the new model’s fuel efficiency also exceeds the older one.

Hyundai Motor and its affiliate Kia Motors launched an event that offers a discount for consumers of hybrids.

Buyers of the Avante Hybrid and the Sonata Hybrid are enjoying a discount of 1 million won from early February, while the earlier discounts for the models were 700,000 won and 500,000 won, respectively.

The cheaper model of the Sonata hybrid sedan is priced at below 30 million won.

The new hybrid model is aimed at attracting more middle-income consumers as the eco-friendly vehicle has been quite expensive compared to gasoline-powered models.

“The new model is cheaper by about 1.1 million won than the original Sonata hybrid,” a company spokesman said.

To lower the consumer prices, he said, several options including leather steering wheel are omitted.

Kia is holding the “K5 Hybrid Big Event” which guarantees compensation services for the sedan’s auto components for 10 years and driving distance of 200,000 kilometers, extending from the earlier guarantee period of six years and 120,000 kilometers.

Despite the hype from carmakers and the government’s drive to popularize eco-friendly vehicles, Korean motorists have remained lukewarm toward hybrid vehicles over the past few years.

But Hyundai-Kia predicted the lower priced models will be attracted to consumers.

The automotive group also appears to be quite confident in the hybrid models’ ability to measure up to more established models such as the Camry Hybrid.