With Valentine’s Day landing on a Tuesday this year, the weekend poses the perfect opportunity for girlfriends and female admirers to go gift-shopping.

Each year has witnessed a progressive change in the way Koreans celebrate the day.

What began as a day for females to express their affections to men through the medium of chocolate is a more even-keeled event now.

In addition to a movement toward shared gift-giving, women have been expanding the repertoire, adding wallets, watches, cologne and cosmetics to the present list.

“I think I was in my early 20s when having an additional gift as an option to the standard gift of chocolate started to catch on,” said Brownbreath marketing employee Lee Do-hyun, 25.

“We want to spend more, on par with how much we earn,” Kang said, adding that those in their 30s and 40s today are better off financially than their parents’ generation were at their age.

More cash may not be the sole impetus, however. Men have grown increasingly interested in grooming and style over the years.

According to Park, the men’s fashion renaissance started about three years ago. Back in the day, guys were getting dragged into shops by girlfriends and mothers. Now, men shop of their own volition. This definitely ups the ante for Valentine’s Day gift-hunting.

Korean male fashion is a virtual Alice’s Wonderland of choices. Luxury brands, fast fashion and select shops are just a few of the options available.

In recent years, a growing number of domestic menswear brands have been opening their own flagship stores and some select shops have been creating their own in-house labels.

Here are three such stops that might solve your Valentine’s Day shopping dilemmas. Even if these venues do not get you to pull your wallet out, the trio knows how to make shopping a fun experience and might even turn you green with envy.

What started out as an online, ready-to-wear enterprise headed by two high school homies in 2007 has bloomed into a business with a newly minted store.

Located in the heart of a budding fashion street in Hannam-dong, Second Move’s shop carries both its namesake brand and its more upscale Bastong line.

Clothes are clean-cut and channel a modern prep-influenced aesthetic. The hands-on style of the brand shines through in innovative riffs off of a cup-shaped pocket or a slanted pocket. Practicality comes into play as evidenced by the thoughtful horizontal buttonhole at the bottom of every dress shirt, a sign of good craftsmanship and also a way to prevent the final button from coming undone.

Denim is sourced from Japan and the entire Bastong line is crafted from British Millerain fabric, including a particularly gorgeous cargo-style coat in mustard. An incoming bag line includes a casual briefcase fashioned from Harris Tweed. 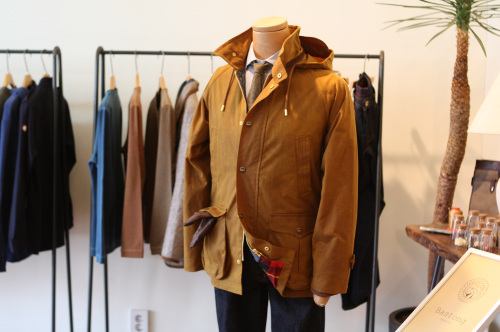 At Second Move’s Hannam-dong shop, a cargo-style coat crafted from British Millerain fabric from the menswear brand’s separate line, Bastong, is on display. (Second Move)
In keeping with the one-stop philosophy of the store, every item needed to complete an outfit is on hand, including knit ties and loafer-friendly “fake” socks.

“Our main customers are guys who’ve completed military duty,” said co-CEO Park, whose clients include men in their 30s and 40s.

For Valentine’s Day, Park suggests bags, wallets and money clips, all of which will be available at the store by Saturday. Men’s bracelets will also be available then.

The 5-year-old Korean fashion brand has mastered the balance between the rugged, the classic and the durable with its collection of clothes, bags and accessories.

“Right now, heritage, tradition and classic are sort of on-trend keywords, so we are kind of going in that direction with our designs,” said international sales and marketing manager Choi.

“Our concept incorporates a bit of a classic and workwear vibe,” said marketing employee Lee, who said the color palette for their upcoming spring-summer collection will be those standard guy-friendly hues ― navy, beige, black, white and khaki. 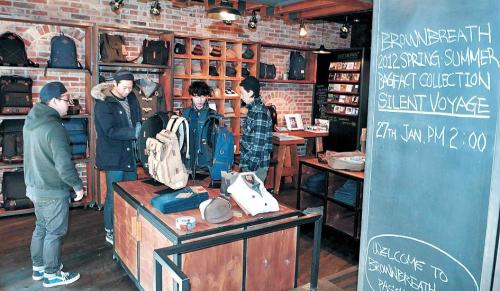 In addition to their famed backpacks, which started to catch on about two years ago, a new spring-summer line of sporty, light and high quality bags are out.

About 70 to 80 percent of the stores’ merchandise is Brownbreath’s, with a smattering of other like-minded brands to round out the selection.

“Hongdae’s concept is younger,” Choi said of the first store, which opened in 2010. Of the second shop, which opened last December, he said, “Sinsa is a bit more classic and older.”

Opening hours for the Sinsa-dong Passage store are from noon to 9 a.m. daily. For more information call (02) 518-2190 or visit www.brownbreath.com.

To get to the new Sinsa-dong Passage store go to Apgujeong Subway Station Line 3. Walk from Hyundai Department Store to Hyundai High School, turn left and cross the street. Walk for several blocks to the 7-Eleven convenience store down Garosugil, towards the side near Sinsa Subway Station. Turn left. The store will be on the left.

The whole place gives off the sheen and feel of high grade chocolate-hued leather, due in part to the European vintage furniture decorating the interior. Each shoe, of the utmost quality and craftsmanship, stands out from its well-placed perch.

In the center is an entire corner devoted to cufflinks, scarves, neckties, socks and other accessories. The effect is that of a well-sequestered den for the whiskey-drinking, cigar-smoking upper class gentleman.

After selling an international selection of premium shoes as a shop-in-shop called il Circo, the business went independent last February. 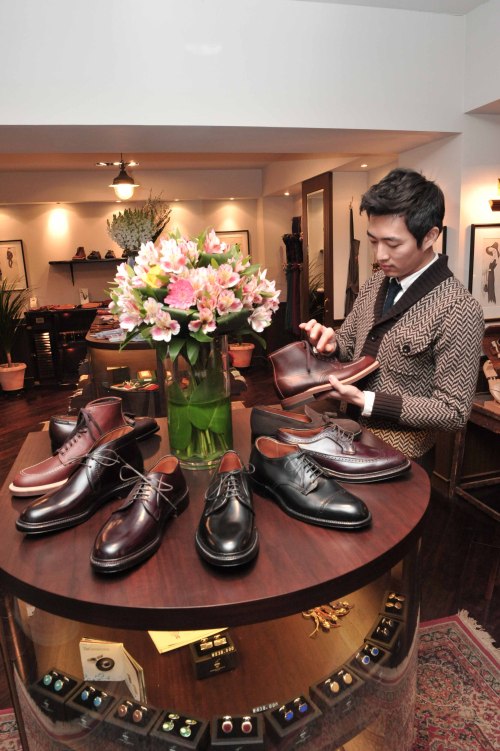 “Then about two years later, demand was increasing at a rate that was faster than expected,” he said. “So we went independent.”

Aside from a carefully curated-selection of the creme de la creme of artisanal footwear that includes the American heritage brand Alden, Unipair also has an in-house label selection of knit ties, belts, wallets and shoes.

“We needed Unipair to have its own character, so we experimented with shoes and accessories to form an identity,” he said.

Ties, shoes and wallets are made in Italy after Unipair determines each design from the look down to the materials.

Kang suggests their in-house label wallets for a potential Valentine’s Day gift, priding himself on the slim and light heft of the calfskin leather wallets.

“You can put 10 cards into it and it is thin enough to fit into the inner breast pocket of a suit jacket,” he said.

Kang also suggests cufflinks as an ideal present, because a guy “can be really stylish with them but they are hard to buy for yourself.”

“Wittily-shaped cufflinks will make him happy,” he said.

As for shoes, Kang says, the belief that if you give footwear as a gift to someone he or she will leave you is changing.

“Women are increasingly buying wedding shoes for their fiancs or footwear for their fathers,” he said, but says it still is not a common practice for women to gift shoes to men.

Which is fine, because Unipair sells everything from pocket squares to bowties to leather bracelets.

“In Italy it was trendy for men to roll up their sleeves and stack bracelets on their wrists and they were hot here last summer,” he said.

Women who want to dandify their men can also look to knit ties that channel a “1970s Ivy League collegiate Sunday best” vibe.

To get there go to Apgujeong Subway Station Line 3, Exit 2 and walk toward Galleria Department Store. Turn right at Hana Bank and walk several blocks. Turn left at The Kitchen Salvatore Cuomo. Unipair is on the left.